The next little task for the scenario machine is the Battle of Lemnos in early (January) 1913. I am still trying to find a reference with a definitive date (by that, I mean one I can verify as off the Greek calender or the Gregorian one). The Naval Battle of Lemnos is a little naval battle from the Balkan Wars where Turkish and Greek vessels set to each other around Lemnos.

The Greek flotilla was under the command of Rear Admiral Pavlos Kountouriotis. In it were: 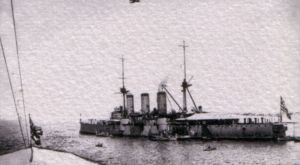 I am away from my Conways at the moment but asking friends and acquaintances in a number of places, principally jim k from one of the Yahoo groups I subscribe to, I have managed to search out more information on these vessels. The Turkish battleship, Assar-i-Tevfik, remained in the Dardanelles and did not participate in the battle.

On the matter of calender, January 5 Gregorian = January 18 on the Julian (Greek) Calender, hence the confusion.

Around 08:20 in the morning of 5 January Greek patrols sighted the Ottoman fleet. The Greek fleet was signalled and accordingly made way from Moudros Bay at 09:45. About 20 kilometres south-east of Lemnos, the two fleets came within sight of each other, with both fleets, led by their flagships, sailing on a south-easterly heading. The columns were converging.

At 11:34 at a distance between the columns of 8400 metres the fleets opened fire on each other. The Greek fleet (to the west of the Ottomans) turned to port to close the distance further.

Just before 11:50, the Medjidye and the Ottoman destroyers turned sharply to port onto a new heading of north-east, steaming towards the Dardanelles. At 11:50 the Mesudiye also turned to port following. It had suffered heavy damage from combined fire from Hydra and Psara.

11:54 and the Averof is firing on the Barbaros. A straddle and the Barbaros‘ middle tower is destroyed. The Barbaros joins the other Turkish vessels heading back to the Dardanelles. Turgut Reis turned in company and sailed with the Barbaros.

The Averof had superior speed to the other vessels so commenced manoeuvring to use the guns on either side of it against the retreating Turkish vessels. The older Greek ships pursued as quickly and as best they could. The pursuit was called off at 14:30 as the Turkish vessels neared the Dardanelles.

The Turkish vessels managed to keep up a brisk rate of fire, firing around 800 shells during the battle, However many of them (well all right, most of them) actually failed to hit. The Greek firing was considerably more effective.

The Averof received two hits, suffering one injury and minor damage. The other Greek battleships escaped unscathed. The Turkish vessels suffered more. Barbaros was hit by over 20 shells destroying most of its guns and killing 75, wounding 130 crew. Turgut Reis suffered a major leak from 17 hits and 47 casualties. Mesudiye also suffered several hits. However Mesudiye‘s central gun platform was hit by a 10.8-inch shell, causing 68 casualties and destroying the 6-inch gun platform.

The result of this battle was that the Ottoman fleet did not venture forth from the Dardanelles again in the Balkan Wars, leaving the Greek fleet the master of its little part of the Aegean Sea.

Two fleets roughly parallel and approximately 9000 metres (scale) apart, steaming on the same heading is a good starting point for this. I cannot tell if the destroyers did anything other than hang around out of range but they do provide an interesting addition to the battle.

Many of the ships for this Battle are available in 1/3000th scale from Navwar so it is possible to recreate this battle on the table top.

All codes shown below and packet names are from the Navwar catalogue which is downloadable online from http://www.navwar.co.uk/.

With regards to the Greek destroyers, I have not been able to find definitive details of which vessels were present. There were supposed to be 7 destroyers present, so 4 of them can come from the Aetos Class. Certainly some of these were present. Vessels are the Aetos, Ierax, Panther and Leon.

The Barbaros Hayreddin and Turgut Reis were purchased from Germany. They were two of the old Worth class battleships sold to Turkey.

The cruiser Medjdiye was originally built in the USA.

As a guess and as there were 5 destroyers present, then a mix of vessels may be useful. The Turkish Navy had 4 German built destroyers of the S165 class. They also had 4 French Durandal class as well as 8 Italian Ansaldo.The Turks also had 2 boats listed as torpedo gun boats which were in addition to the 4 destroyers. The torpedo gun boats were actually larger than the destroyers but with lighter guns and slower listed speed at only 22 knots. I’ve not been able to find any Durandal or Ansaldo class vessels in the Navwar catalogue – if I do later, I’ll add a comment to this piece. In the meantime, for Turkish destroyers, you can use: