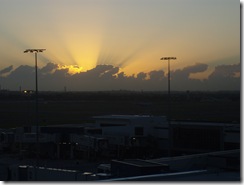 I had to take a business trip to Singapore recently. I can’t recall having written much about Singapore in the past although that could be because I have not had so many trips there over the past few years.

The trip started early and to make my flight I got to watch sunrise over the Charles Kingsford Smith Airport in Sydney before boarding the flight and heading to Singapore. The one advantage of a flight so early was that I arrived in Singapore early enough to stumble around the city and find my way from the hotel I was staying at to the office. This I managed to do without maps, relying instead on the bush craft all Aussies have to find my way in a strange city. Oh, don’t believe it? OK, I know the office was about a ten minute walk away so I wandered down the river until I recognised a bridge and walked in from there. This gave me a chance to pass on the box of Tim Tams I had bought for the office staff to share. Memo to self, bring two boxes of Tim Tam’s next time.

The hotel I stayed at – the Park Hotel on Unity Street (they call it Clarke Quay but it is next to a hotel called the Robinson Quay hotel – and that hotel is between the Park Hotel and the River) is a reasonably new hotel. The food there was OK – nothing special. The service was generally quite good and the rooms whilst not large were comfortable and well tended.

Of course, being a new hotel, the rooms were built to look more spacious by having a glass wall between the bathroom and bedroom. This does, of course, open everything up and give you something to do in the morning when having a shower – watch the TV.

I do like these internal glass walls I must admit, except for one small matter. When one is contemplating the universe whilst seated in the throne room, this is the view. Of course, I figure if I can see the end of the pool, then the end of the pool can see me. Not a sight to consider when turning in the pool whilst doing your laps.

The plus side, however, was each morning taking a stroll along the river to the location of the daily training sessions. At this time of year, the wet season for this part of Asia, the morning temperatures are warm but not too hot so it is a good time for a stroll.

I had two days of training in Singapore, followed by a couple of days of meetings. I also managed to catch up with an old buddy or two (and consumed quite a few Tiger’s to boot). After Singapore I’m off to Bangkok for a few days R&R before returning to Oz. Whilst in Bangkok I’ll be looking at tigers of a different variety.

The other thing I did in Singapore was attend the company Dinner and Games Day. The Singapore office has this each year and it coincided with the trip to Singapore. The day was held on Sentosa, based around the Megazip. More on that later when I get the photos.

In the meantime, thanks to the folks in Singapore for their kindness, as well as the prizes at the party – I am sitting by the pool here reading one of those prizes  🙂

Thanks also to C&W for the iPod shuffle – it has been a great addition to my travelling kit and I must admit, it is my first Apple product … sigh … now I guess resistance is futile – soon it’ll be an iPhone then an iBook.

One thought on “Singapore Trip”