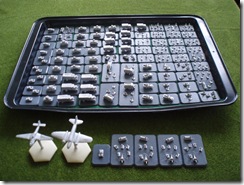 Last night I cleaned up the figures and based them ready for painting. Because these figures are in a very open order I decided to base them before painting. This will make them easier to handle whilst painting.

I decided to base the artillery on larger bases including the crews and some artillery tractors as these are not really moved during battle but are normally parked behind the battle area.

Also based ready for painting are a couple of aircraft – a JU87B Stuka dive bomber and a Caprioni CA310 medium bomber. Not shown but also being prepared (with great frustration to me) is a Fiat CR42 biplane – certainly one of the best aeroplanes of early in World War 2.

All the figures and vehicles here are from Heroics and Ros with the exception of the Dovunque-Viberti Radio trucks and the 65mm Anti-Tank gun Portees (and Portee is an artillery piece mounted in a truck) – the Autocannone 75/27 su Ceirano. They are from Armstrong Miniatures, a small producer who makes the oddball stuff not made by the major manufacturers.