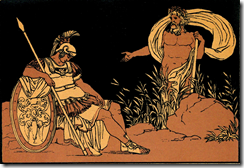 I’m suffering the need for another quick ancient diversion. Yep, as if there is not enough on my wargaming plate (DBMM for Cancon 2011, the Mongolian DBA campaign sets, Italian WW2 in 6mm, bucket loads of 1/3000th ships, Aeronef, Land Ironclads, 6mm Polemos Napoleonic, English Civil War and Great Northern War) I managed to get myself distracted again.

There was a bright shiny object over there and like a moth to the flame I went to look. The bright shiny object was Lo hobbi.t.studio Early Roman figures. The flame was a series of podcasts I was listening to whilst driving back from Mum’s last weekend.  The podcasts covered the history of Rome from Aeneas and Romulus and Remus. Imagination fired, beautiful figures seen – all over red rover, Thomo hooked on another DBA set.

It occurred to me that Early Rome spent a lot of time warring with the neighbouring states, Latin, Etruscans, Hill tribes, Umbrian and so on. In fact, brawling with the neighbours was something the Early Romans were very good at. What a great idea for a simple campaign set. Here we have well balanced opponents for each other in DBA. So, the set will be:

A campaign set for early Rome use DBA rules. The following armies are the six armies for the set:

Most of these armies have a reasonable chance against each other with terrain being important for the Umbrian and the Hill tribes.

A nice balanced set for a DBA Campaign and one that I will write more of later as I collect the figures and get around to painting them. Of course, you may need to wait a while for that  😆