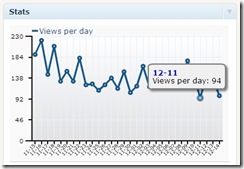 Thomo’s Hole consistently gets around 130 to 200 hits per day and has done so for some time now (thanks folks).  There was a sharp decline the other day however. We dropped to 94 hits on 11 December 2010. This coincided with the Denial of Service attacks on Visa, Mastercard and Amazon amongst others.

Thomo’s Hole is hosted on Amazon and I guess this explains the negative result for the day.

Of course, the thing I can’t understand about the whole Wikileaks thing is that Wikileaks is not stealing these documents. All Wikileaks is doing is the same thing that the New York Times or the Sydney Morning Herald is doing and that is printing already leaked documents.