Whilst the first two days of Cancon 2011 were taken up with the DBMM competition (from my perspective at least), the third day was the DBA competition, and the competition that I unexpectedly shined in. The army I took was the Book III, List 10b Hindu Indian (Rajput). I had only completed the painting and basing of this army the day before leaving for Cancon and in fact, on the night prior to departure, I was still working on the Camp for the army.

I’ll provide an updated AAR with photos of each of the games later (indeed, I plan to do the same thing with DBMM when I get a chance). In the meantime (and assuming that my failing memory is working well enough), over the six rounds of the DBA competition I played the following opponents (in no particular order):

After the six rounds were played I had lost only one game to Jason Dickie’s Late Imperial Roman’s – although I like to think of that game as my training game.

I must thank all my opponents for delightful games played in a good spirit and for the helpful advice provided to a n00b who really had not played DBA for 10 years. Even  better was the advice given after I had moved and then said “yes, you are right, that would have been a better move but I really can’t take this back now” only to find that once the dice had finished rolling that bound, the move that “I really can’t take this back now” turned out to be where I won the game. 😆

The final results for the competition were:

So, all there is left is to display the trophy, and the second place army: 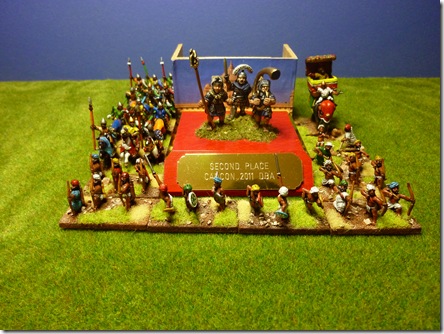