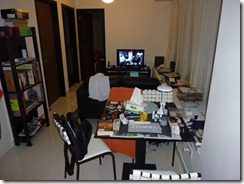 I mentioned previously that I had found the odd wargamer or two in Singapore and that Warhammer and Flames of War seemed to be the rules played most often here. I’ll admit, I did briefly think of Flames of War but then thought “Ancients! I’d like to do some Ancients!”

I started looking around and considering the possibilities. The first thing I considered was scale. My condominium is not so large (see the picture to the left) and the table is only 80cm square (about 32 inches). A 6×4 table was definitely out at home. I am immediately thinking 15mm or smaller. The first thought then was to paint figures and head off to somewhere like Paradigm Infinitum to play. I could buy a Flames of War Army and all the rulebooks for just a small fortune and I’d be away.

Storage would be something of a problem as well although I do have the bomb shelter here as an option … and let’s face it, if a bomb goes off the first thing a wargamer wants to save is his figures.

That’s when the other thought popped up. “Ancients!”

I had a butt-load of 15mm DBA armies at home (26 to be exact) and only one painted (the Rajputs that came second in the DBA competition at Cancon 2011). Maybe I could bring some of them back to paint. The playing area would only need to be 24-inches (600mm) square – quite doable in this condominium. I even had a couple of projects part planned and half started.

However, I am a wargamer so what could be better than another project?

I started to think about how to do something that was light enough to be man-portable across Singapore (so I could take it to other locations for a game) and small enough to use here if I chose. A mate of mine had a DBA game board made from a framed painting canvas. There was an art shop down the road. I had looked there in the past when I was looking for paint supplies and they had some 24-inch square canvases.

6mm ancients then popped into my head and in particular the figures of Pete Berry’s Baccus 6mm. I’d build a matched pair. I’d build two 6mm DBA armies. I then started to do a little research as I wanted to make sure that the two armies I selected were balanced enough to give good games with the result being decided by good generalship and a bit of luck instead of one army not having a chance against the other. I also wanted some contemporary opponents.

I started researching on the Fanaticus website. I looked under the Resources link and then the Army Notes. I came across the Syracusans and thought, “hmm, they seem like an interesting bunch – who are the enemies?”

Enemies were Carthaginians and Romans in particular. I thought – “ah ha!” Classic opposition and I am sure there is a campaign set here. Maybe four armies are better than two, then I can play Big Battle DBA as well.

One thing led to another and being the usual type of wargamer, the project has grown to something just less than monumental proportions. More on that later as I intend to document the whole project.

The next instalment will cover the planning and purchasing of the the game board and terrain and then later the armies finally selected.

4 thoughts on “The Singapore Wargames Project–Part 1”