There were a few hundred folks there, with many coming and going over the two days. In the various areas there were different games being played, including Axis and Allies, Flames of War, Warhammer, Warhammer 40K, Warmachine, Firestorm Armada and the Singapore championships for the Settlers of Catan.

In addition to the games there was also a painting corner and a painting competition. There were no traders there and that is the one thing that was really missing, a way to make an unplanned expenditure of money when caught in the mood of the moment. 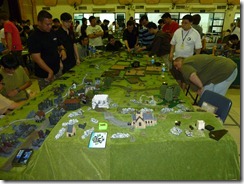