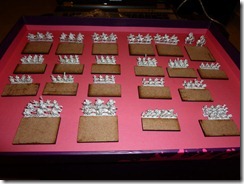 I spent some time this weekend doing two things for the Singapore Wargames Project. The first was starting on the game board and the terrain. The second was sorting the figures and the bases out. I was expecting that I would have some errors in purchasing and I did. I had a few too many figures left over from a couple of the packs I purchased – like why did I buy Tarentine cavalry? I also ended up discovering that I had miscalculated the number of bases I needed in the 40x20mm size. I know why that happened. As I sorted the figures out I found that I could pretty much do all the variations so I started to plan that way. This left me short some bases. Oh well, a quick order off to East Riding Miniatures tonight will see that corrected.

I decided to start with the Numidians as I am guessing they will be the easiest of the seven armies to paint. Looking through the list, I need to allow for the following troops to meet all the requirements.

These then are all the elements that I need to make to cover all options of the Numidian Army. For figures per base, a little experimenting and I worked out the following ratios:

Infantry – use four 6mm figures for each 15mm figure recommended in the rules. In this case, a 3Ax base of 6mm figures will contain 12 figures (the 15mm equivalent is 3 figures).

Cavalry – to give a little more space, I decided to use three 6mm figures for each 15mm figure recommended. A 2LH base in 6mm will therefore contain 6 figures (the 15mm equivalent is 2 figures).

Elephants, Artillery and Chariots – I decided that two 6mm models per base would work best. The 15mm equivalent is one model.

For references on the Numidians, perhaps the best starting places are:

The terrain requirements for this army are listed as Hilly. This means that as I make the terrain I will need to make sure I have the following for this army:

OK, that is the organisation of the figures for the Numidians. The picture at the top of this is the figures and bases sorted and organised for the eventual painting.

I will update the next six armies over the next week or so as well as progress of the game board.