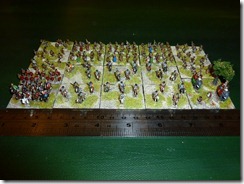 I finished the 6mm Numidian DBA army this weekend – part of my Singapore project. I painted all options for this force and they can all be seen in the picture. This will enable me to pad out some of the Punic Wars collection as well as well as provide an army to play some battles of the Jugurthine War.

The next army to be painted will be the Polybian Romans – a good opponent for the Numidians for the Jugurthine War. The Jugurthine War takes its name from the Berber king Jugurtha, nephew and later adopted son of Micipsa, King of Numidia.

To provide for the full list for DBA, I painted 21 elements (a DBA army normally consists of 12 elements). This lets me adopt most of the interpretations, in wargaming terms, of how the  Numidians arrayed for battle. The most significant difference is in the infantry where the Numidians can be represented as a pure skirmishing force or a force with then ability to stand against some opponents and to excel in rough terrain. The elements produced were:

I am looking forward to getting the Romans painted, and some terrain made, so that I can get down to some games.

3 thoughts on “Numidians are Finished”