We got around to playing the final final on Saturday the 12 of November … 10 months after Cancon 2011 had finished.

I took the mighty Rajputs out for one final outing against Doug’s DBA v2 army, IV/30 Teutonic Orders. The photograph above shows the two armies after deployment. The Rajputs took the elephant out for a final jaunt along with three knights, two blades, two Psiloi and 4 Bows. The Teutonic Orders were four knights (one a general), one Cavalry, two light horse, one spears, two crossbows, a psiloi and an auxilia element.

Doug was well into his cups at this stage and so the fog of war was thick. I had decided that to be fair, I should also attempt to increase said fog so dived into a couple of Jim Beam’s with cola. We rolled and I was the defender. 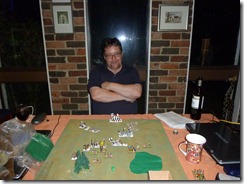 The game balance moved to and fro, favouring first one of us then the other. During the DBA competition time was called at 45 minutes but at that time the game here hung in the balance so being the incredibly generous bloke that I am, I kept playing instead of taking the draw (with a slight points win in my favour at that point).

We were hanging in the balance, me with three elements gone, Doug with three elements gone. We rolled on the last bound, I lost my fourth element. The next combat saw Doug’s general eliminated – 4 elements each and his general gone. There was one final combat to go – his light horse against my blades – 2-2 in factors. We rolled – I rolled one and Doug rolled 4. A 6-3 result his way and the death of the blades resulting in a 5-4 win to Doug.

So, in what can only be described as scraping a win in extra time, Doug managed to defeat the mighty Rajputs to be the undisputed DBA champion from Cancon 2011.