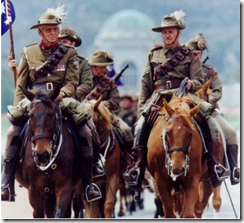 Old Reynalla in the City of Onkaparinga, South Australia, is the site of a Festival of History over the 9th and 10th of March, 2013.

The festival will include vintage cars on display, model railroading, re-enactment groups, static displays of different artillery amongst other things but perhaps the greatest attraction to the wargamer is the refight of the Battle of Leipzig (it is the 200th anniversary next year after all)

Further information can be obtained by contacting the Old Reynalla Festival Director, Mal Wright, on +61 8 8381 5785 or mgwright@bigpond.net.au.

It is a good opportunity for overseas visitors to take a bit of a holiday in a really nice part of Australia whilst getting in some wargaming as well. There are plenty of other activities in the area to keep partners happy as well.