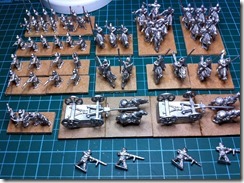 Friday night, when I eventually got home, was spent adding magnetic tape to the appropriately sized bases. There were a couple of issues to deal with, such as the War Wagon bases and the Knights that are on double sized bases. In the end, to solve that problem I used the magnetic tape I adhere to the bottom if the wooden bases to hold the two halves together. Tomorrow when I ass the sand to the bases I am sure that will permanently join them/

The photograph shows the troops laid out. I am sure that I am going to regret trying the new painting method on these, especially the big bases of knights, but hey, you have to try new things sometimes.

The war wagons at the front are not completely glued together yet. I am waiting for the glue holding the wheels on to set before I put any loading on the wheels. That will be first up tomorrow morning.

In the meantime the search continues for uniform information.