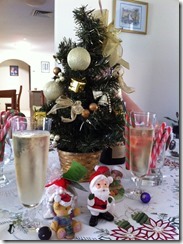 Christmas was spent with the lady, Mum, my sister and brother-in-law and niece in Brisbane. It’s been a couple of years since we had Christmas here. Mum had decided to accept my sister’s invitation for Christmas to be out of the house when we were bringing in boxes and such so caught the train and bus to Brisbane.

We followed a couple of days later.

Lunch was terrific – just enough of everything to satisfy, not so much as to be greedy or overeat! ((well, except for the cashews))

It was great catching up with my sister and BIL as well as my niece.

Next social function is off to Canberra for New Year’s Eve.