Some folks get the idea that travel is fun (which it is) and therefore business travel must be more fun because someone else is paying for it. It isn’t. Following is my journey from Macksville to Jakarta. 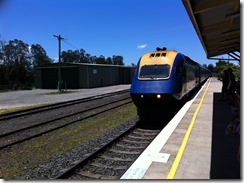 It started with the XPT train journey from Macksville Station. Temperature was about 30 degrees and a bright sunny day. The train left Macksville on time at 1:30pm and headed south at a stately pace. We stopped at a number of stations on the way to Sydney, including Kempsey, Wauchope, Gloucester and such. By the time we got to Maitland we were running about 5 minutes early so got to sit around there for five minutes longer than necessary.

We passed long coal trains (80 coal wagons) and some pretty countryside but the worst part of the journey was the child screaming all the way to Sydney.

We arrived at Central Station in Sydney at 9:06pm on time.

A taxi to Jeff’s where I spent the night.

A taxi was booked for 7:15 the following morning to take me to the airport.

Sylvester Stallone: "I heard you were bitten by a cobra".

Chuck Norris: "I was but after five days of agonising pain the cobra died".

From the in-flight movie, the Expendables 2. 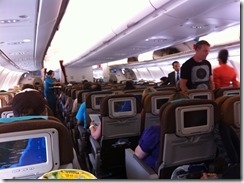 Having a bite at the airport the amusing sight of the day was the bloke who spills a full cup of coffee over the table and his wife. A quick clean off of her skirt and she’s off to the toilet to clean up. His next move, remorselessly, is to pick up the coffee cup and drain what is left before worrying about any sort of clean-up to the table and surrounds.

Aircraft boarding call is made and we board. Disconnect from the air-bridge and commence taxiing on time. We then sit on the taxiway for about 30 minutes, plane in front of us and six more queued behind us. We eventually get to the runway and are airborne.

By the time we are half way to Denpasar, the Expendables 2 movie is almost finished. We have also had an almost continuous stream of turbulence and altering of course and height to try and avoid the turbulence. Seems the great heat of Australia on Tuesday is also affecting the weather 10,000 metres above ground level.

The big plus on this Garuda flight is the in-flight immigration. Brilliant!

We arrived at Denpasar, collected bags, passed customs, handed the bags to the transfer desk then walked to the domestic terminal.

Denpasar domestic terminal is being rebuilt so inside it the temperature is thirty something degrees, there’s no WiFi, no air-conditioning, lots of building works, sweat is dripping from my fingers and my new Popeye t-shirt is melting. Also the flies are Australian in their persistence and annoyance.

Finally it was time to board. There was the ride out to the plane on an airport bus. The door I was leaning against flew open as the bus turned. A quick death grip on one of the poles and a few choice adjectives helped in regaining the main cabin of the bus. 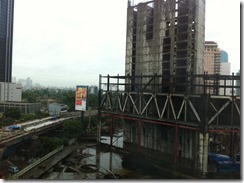 The outside air was cooler than the terminal and the inside air of the aircraft was just wonderful.

Finally arrived in Jakarta and headed out through the maelstrom of "private" taxi drivers to the peace of a White Horse taxi – there was a queue at the Silver Bird stand.

We then zoom along the airport road until the toll gate and the Jakarta traffic slows us to a pace a bullock cart would be pleased to achieve. It takes about the same time from the airport to the hotel as it does from Bali to Jakarta.

Finally the peace and tranquillity of the hotel. I’d been up for 19 hours getting from Ashfield to Jakarta and had 8 hours travelling by train the day before – just another normal day for Thomo. It was definitely time for a glass of Dr Feelgood.

Oh, and lest you think it all gets better at the hotel – the last photo is the view from my window!