I managed to get some painting done yesterday regardless of the attendance at Anthony’s birthday brunch.

In an attempt to maximise the effectiveness of the painting yesterday, and allowing for a semi-inebriated state from the champagne and beer at the brunch, I thought I’d finish off the foot as they were nice and straightforward.

This was a fairly simple bit of painting. I’d decided to go with a white theme whilst for some colour, the variation of the Korean red and blue being used to paint trousers and as a highlight to the tunic colour itself. 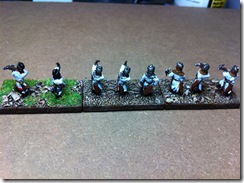 It has therefore provided some brightness to the figures.

At the same time, I thought I would see how the bases might look when they are completed so I flocked the Psiloi. Citadel had re-released their blade grass static grass flock. This is a richer green than their other ones so I thought a test base was in order just to see what the final was going to look like.

I think the final flocking colour has come up quite well and I am happy with that green. I also think that coupled with some dry grass (yellow) that it will work really well for the Hungarians, given that they have some bigger rocks on the base.

The photo below is how the Koguryo Koreans look now. I have just the light horse to finish painting, then some flocking on the base and varnishing before all the Koguryo Koreans are finished. I am hoping to get that completed tonight which will just leave me needing to do a camp.

However, in the usual way that things conspire against our deadlines, today I have a throbbing foot from gout which the meds have not yet taken the pain away from and have just had a tooth extracted, adding a throbbing pain in my mouth (the trade off was that as I stopped dribbling like an idiot as the anaesthetic wore off, so the pain in the mouth increased). Er, and the meds have not taken that pain away either although I am feeling very drowsy!

I think at this point too I can note that basing the figures before painting seems to work quite well, especially as it makes the base sanding and painting much faster and reduces to an extent the amount of paint that you need to add to a figure to complete it. I will still reserve judgement a little on things like the packed bases of the Hungarians. I think they may have been better approached in the old way of adding the figures to a tongue depressor and painting first before basing,