The open house at Changi Naval Base gave me a chance to see a some of the Republic of Singapore’s stealth frigates – the Formidable-class vessels. They really are a good looking vessel. At berth were RSSs Steadfast, Intrepid and Tenacious.

Singapore has six of these vessels overall and they are the most modern frigates in the South East Asian area.

The vessels are multi-mission derivatives of the French Navy’s La Fayette class frigate. The frigates serve as key information nodes as well as fighting units, and the six ships form the 185 Squadron of the Republic of Singapore Navy.

The class leader, RSS Formidable was launched on 7 January 2004 and commissioned into the Republic’s Navy on 5 May 2007. The rest of the vessels followed over the period February 2008 through to January 2009, being commissioned in two groups.

The main armament of the frigates is Boeing’s Harpoon missiles with the almost ubiquitous OTO Melara 76 mm gun for surface defence.

A S-70B Seahawk multi-mission capable naval helicopter completes the main offensive armament of the vessels in the class. These provide an anti-submarine capability along with an active low frequency towed sonar enabling long range submarine detection and classification. Lightweight torpedoes fired from two B515 triple-tube launchers hidden behind the bulwark along with the same model torpedo carried by the helicopters enable the frigates to engage submarines. 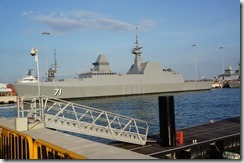 The vessels are capable of 27 knots and have a range of 4,300 nautical miles cruising at 18 knots.

The vessels on the class are: