The early world war 2 Soviet force is shown below. I will be using this against Japanese and Hungarians, both of which I still need to paint. The battles against the Japanese will be a little bit anachronistic as I do not have the very early armour used by the Russians at Khalkin-gol (Nomonhan).

Still, look out Doug, there are more to come – including late war heavies to see your Tiger 2s off 😉

In the meantime, feel free to have a look around this force in the gallery below. I will admit that I still need to add decals to the tanks. I am waiting until the mood takes me again to do that much fiddly cutting and decaling!

Bell P-39 Airacobra and Polikarpov I-16 Rata Mosca – both early war aircraft in use by the Soviets. Models by GHQ, bases by Raiden. 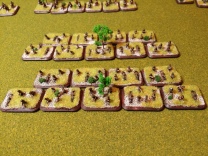 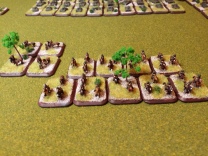 Mounted Russians and dismounted markers. Cavalry will normally be able to deploy as infantry

Two Headquarters bases and like all Headquarters, even on the steppe will find a shady tree 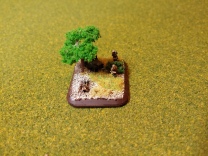 Engineers – flame throwers on the left, mine-sweeping on the right and some general engineer elements in the rear (digging up mines perhaps) – these are Adler figures

A side view of the engineers

Infantry Support – 82mm mortar on the left, anti-tank rifles in the centre and heavy machine guns (HMG or MMG) on the right

Side view of the Infantry support 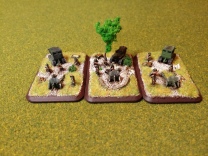 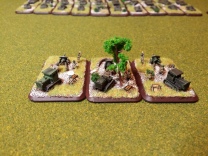 The artillery battery from the rear

Soviet light tank company consisting of GHQ T-60 scout tanks. These were produced in large numbers from 1941 to 1942 being replaced by T-70 light tanks 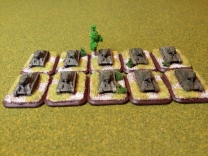