As I am unable to attend Cancon 2014 I thought instead that I would hit the international circuit. The Broken Bayonets wargames club in Kuala Lumpur, Malaysia, host an annual De Bellis Antiquitatis (DBA) competition called DeBAKLe (get it? DBA KL). It seems that one of the important things about DeBAKLe is that is should not be held in the same year that it is planned. So, for example, DeBAKLe 2013 is being held on 15 February 2014 1.

Kuala Lumpur is just a short bus trip up the Peninsula from Singapore 2. and the cost of the return trip is about SG $70 (more if a really luxury coach with meal service is required, less, about MYR 68, if travel is to and from Johor Bahru). This compares to a cheap flight on JetStar or AirAsia with a cost of around SG $128-165 3. I think I have decided to take the bus and enjoy the scenery … before the sun goes down.

I asked some of the guys from the Broken Bayonets what sort of armies were prevalent in the competition as I thought I would try and match with something contemporary. I was told that the armies were from all over and that they tended to be none of the world beaters but rather, there was a certain honour in competing with crappy armies. I have quite a few of those in the lead pile. Now I am trying to decide which army to paint and take. I have Burmese and Khmer back in Singapore ready for paint and they are an option. I also went into the lead pile and started to look at what I had down there that could be painted, would look quite good but which would earn points for being crappy. The first cut through revealed the following. 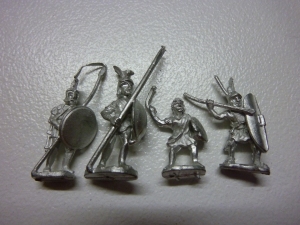 The variable size Museum 15mm ranging from small to huge – truly David to Goliath – but Roman!

One of the problems with the Tullians however is the variable sizes of the Museum figures – regardless of whether you like the style of the figures or not there are huge size differences in these figures.

To be fair, I think in part it is because these figures are old and perhaps I purchased them in the time between starting a re-sculpt of a range and finishing that re-sculpt although the hoplite and the slinger really are a David and Goliath!

So, there are a couple of possibles from this lot for the DeBAKLe 2013 army.

1. Although to be fair the February date was chosen in part to accommodate my possible attendance
2. By short, one means 6 hours between Singapore and Kuala Lumpur, 4.5 hours between Johor Bahru and Kuala Lumpur with about 45 to 60 minutes spent dicking around with Immigration and Customs
3. And a time period of 3.5 to 4 hours – the flight time is just under an hour baring congestion but there is the time taken getting to and from the airports – plus an additional cost in Malaysia in particular because KLIA is so far from the city centre