The last time Général de Corps Anthony faced Major General Thomo the Lost was the 5th of May.  Nearly eight weeks later we faced each other across the field of battle one more time. This was a special battle as it was the last time I was going to be in the position to battle with Anthony, face to face, beer to beer, for some time to come as I up sticks and high-tail it out of Dodge … er … sorry … Singapore.

The battlefield was laid out as I arrived and it was decided to play along the battlefield rather than across it. Because of the wicked dice feng shui plaguing Anthony in the past, we decided to dice to see who took the French, with the winner to take them. Once again, I ended up as the British commander.

Forces were equal so we set about deploying. At about this moment, a very nice beer was offered by the commander of the French so toasts were drunk and we retired to the balcony for the Singapore version of a sausage sizzle and that marvel of Australian gastronomic delight – the sausage sanger! The sangers were despatched, as was the beer, so we returned to the table.

I had based my tactics around holding the village in the centre of the table with my forces able to run back into the forest should the going get a little tough. My artillery was massed on my left. The rifles were in the best position to take the town and they were ably supported by the Portuguese.

My right flank was protected by three battalions of English and Highland troops. Battle commenced, dice were rolled, the French were rolled, au revoir, c’est tout ce qu’elle a écrit.

Whilst I lost a light cavalry regiment carelessly, and a few troops from other battalions, the French lost heavily. Again, the dice smiled upon me and laughed at Anthony. I must remember to take my pilgrimage to the shrine of St Magnus (the patron saint of dice rollers – read the Orkneyinga Saga for verification)!

In any case, thanks Anthony for the hospitality, beer, sausages, the games and most importantly, for being a mate!

Deployment – French on the left, British on the right 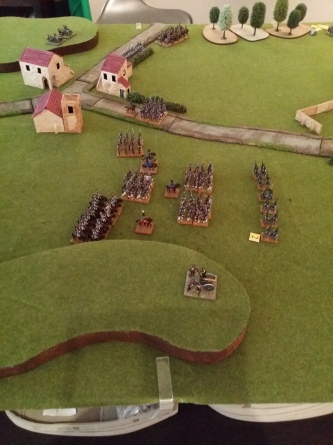 The French come on

The French ready themselves to assault the town

The cream of the French Cavalry, defeated, repulsed and shaken … but not broken!

The view to the town from the cuirassiers 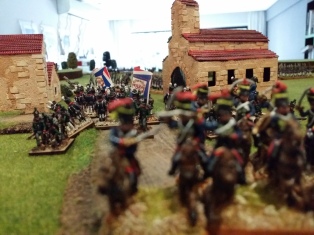 And then, what better way to complete the battle than …