I was knackered last night so went to bed early. I followed my usual routine, large drink of water, clean teeth and retire to slumber. Usually, as the last thing before sleep, I will watch a movie or TV show on my phone. I know, it’s supposed to prevent you sleeping well but I find it relaxing … go figure! Last night I watched the first episode of Reign. I’ve been kind of caught up in the world of the Tudors recently and it was good to see how far the producers, directors and writers of the shows I have been watching have drifted from the history.

Anyway, I watched, snoozed then slept … only to awake at about three in the morning, unable initially to fall back to sleep again. So, what else does one do at three in the cool of a Singapore morning? I got up and painted for a while. Painting is a catharsis for me (as compared to cathartic for which I rely on a good, heady beer) and usually calms my mind, spirit and emotions so that I can relax. I was hoping that a 3:00 am painting session for about 30 minutes would help me to sleep again. It did.

I had decided that rather than work on all the figures in a single batch, from yesterday’s point onwards I would work on 5 or so bases at a time. That way if any of the technique or paints did not work out I only had a few to repaint rather than the whole batch.

The painting sessions yesterday and this morning were initially to get the webbing done but I decided to do some washing and dry brushing as well, just to see how things turned out. 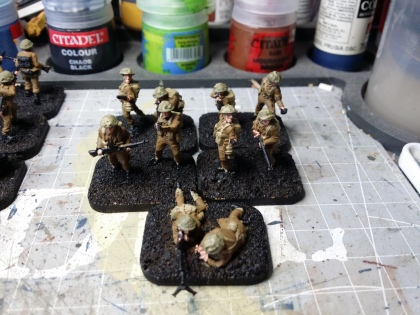 Webbing and packs were painted in a khaki colour

A brown was was applied. When wet, it looks like all the colour has been sucked out

The same group once the wash has dried. The colours are a little more separate again

And lastly, some Russian Uniform (green) across the helmets

The picture quality is not great – the phone’s camera combined with the light on the painting table tends to wash the colours together but I am quite pleased with the way that batch looks now. The wash has picked out items such as the collars on the uniform and other fine details. It has also provided an edge between the uniform and the webbing.

Next task will be to do the same for the rest of the figures, then pick out the weapons, water bottles and other smaller items such as the bayonet scabbards.