I posed the question yesterday about the basing of destroyers and TBDs for my 2015 Jutland project. I mentioned that in the past, I would have based them all individually but given the number of destroyers present at Jutland, I was thinking about a number of different basing options:

I did like the options of basing either by half flotilla or division. After playing with the ships on a cm square grid, I came to the conclusion that if I was going to bulk base, that I would need to base by division. A half flotilla (two divisions) would just take up too much area. Basing by division would give me a base approximately 4cm wide with four vessels based, either in line abreast or oblique.

However, I think I am going to opt for single basing of the destroyers and TBDs, along with all the other vessels. The destroyers will be on a base 1cm wide which is big enough to handle, also big enough to model a little sea on the base and to carry the vessel’s name down the side.

The pictures below give and idea of the relative size of the destroyers to a battle ship (in this case, HMS Agamemnon). You can also see the full 4th destroyer flotilla laid out with flotilla leader and half flotilla leaders shown. I used a number of Admiralty M-class destroyers for the testing. 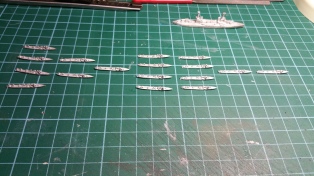 The full 4th Destroyer Flotilla with leaders (well, all made up with M-class destroyers) 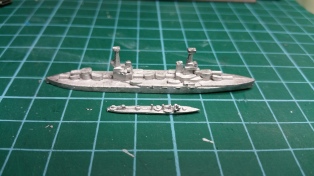 A destroyer next to the Agamemnon – it’s all a matter of scale. The battleships will likely go on bases 2cm wide by about 8cm long 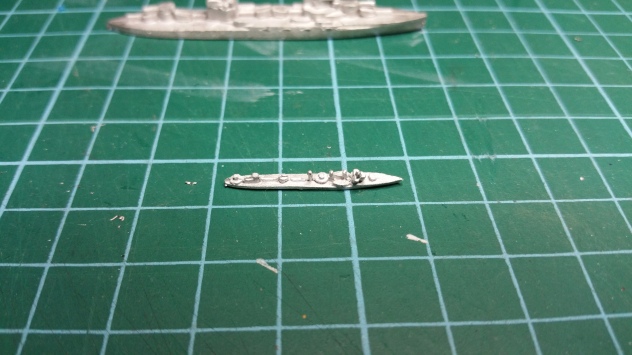