The Americans were the next to be prepared for painting.

They are organised along the lines suggested in the Land Ironclad rules. Ready for the sand and paint are a Battalion of Infantry (4 companies); two companies of marines; an artillery regiment (4 batteries); and 4 regiments of cavalry (three of them having a dismounted equivalent – two dismounted bases to every three mounted bases).

As with the Russians, the figure models represent 10 men so the infantry companies are about 400 men strong and the cavalry regiments around 300 troopers.

Next off will be the conventional forces of one of the newcomers to Peshawar but an old power – the Prussians. 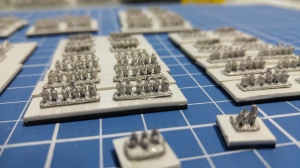