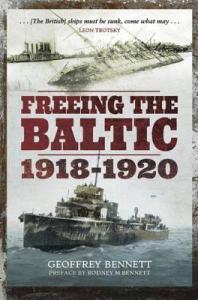 In 1964 Geoffrey Bennett wrote a book called Cowan’s War. The book centered on the Battles to help free Russia from the Bolsheviks. I remember reading it when I was a teenager as the concept of Britain being involved in another little war immediately after World War One was interesting, and I had just finished reading a book about a motor boat fighting the Bolsheviks (the name of the book eluding me at the moment).

When the opportunity came to review Bennett’s Freeing the Baltic – 1918-1920 it was a great excuse to reread the history and recapture (briefly) the feelings I had when I was a teenager.

The main text of the book covers the complexity of this war. The Entente Cordiale were in the process of negotiating the Versailles Treaty with the Central Powers at the same time as the Russian Revolution was in full swing with the White Russians trying to resist the Bolsheviks (Red Russians). The Entente would have preferred independant Baltic States (as indeed would the states of Latvia, Estonia and Lithuania). The Germans were still active in the region until the Entente coould direct support there. 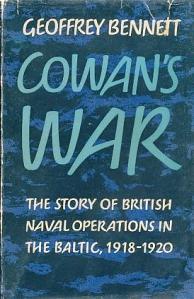 Bennett wrote about the Royal Navy admiral, Cowan, who was tasked with supporting the White Russians, ejecting the Germans, supporting the Baltic States in their quest for independence while dealing with his own government, crewmen who had had enough of war and wanted to return to home ports along with mines and all with some light cruisers and destroyers.

It is a boy’s own story and I enjoyed reading it again as a somewhat older boy. That the Baltic States were subjugated by the Soviets or the White Russians were defeated by the Bolsheviks is not because of Cowan’s inabilities but rather an inevitability of the creation of the USSR.

The cover of the book carries a quote from Leon Trotsky, “[The British] ships must be sunk, come what may”. This was the environment Cowan found himself in. The Admiralty assigned 238 ships to the area including 23 light cruisers, 85 destroyers and 1 aircraft carrier with 55 aircraft. The French asl allocated 26 vessels, the Italians 2 and the U.S.A. 14. Over the conflict 17 British vessels were lost to mines, weatrher and the enemy. Sixty-one vessels were damaged and 37 aircraft were lost.

In the area the Soviets had 30 vessels approximately including two battleships.

Bennett’s son added a preface and an addendum to the book containing information uncovered later. Perhaps the most ineresting was Admiral Walter Cowan’s career in World War Two where he served in the Western Dessert with the Indian 18th King Edward’s Own Cavalry, mounted on bren-gun carriers. Captured by the Italians, then later part of a prisoner swap he returned to the dessert. When the Second World War was over he was invited to Indian to become the honourary colonel of the 18th King Edward’s Own, surely the first naval officer to be so honoured.

I loved this book when I was a teenager and I love it now and really appreciate the excuse to read it a second time. The additions by Bennett’s son enhance the book rather than detracting at all from his father’s work. Thoroughly recommended.