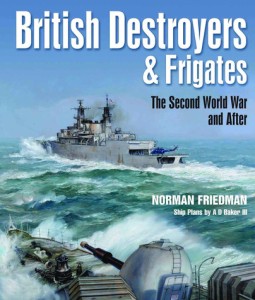 It just so happened that I was reading Sixty Minutes for St George, a Nicholas Everard Thriller (Book 2) where Nick as stationed aboard HMS Mackerel, a fictional destroyer in World War I. I can recommend the Nicolas Everard series, ripping good yarns with a very accurate nautical theme. Anyway, while reading that, along came a copy of British Destroyers & Frigates, The Second World War and After by Norman Friedman. This edition is published on 17 May 2017 by Seaforth Publishing, has 352 pages and its ISBN is 9781526702821. There are also Kindle and ePub versions available.

Since the Second World War we have seen largely the disappearance of the old classes of cruisers and capital ships, with the obvious exception of aircraft and helicopter carriers. Over that same period destroyers and frigates have merged and whilst we still refer to FFGs and DDGs, these vessels have moved closer and closer, especially as Frigates have got larger. Friedman covers this transition within the British Navy well in this work, dealing with the political, strategic and tactical issues that have brought forward Royal Navy designs such as the Type 45 air defence escort.

The book itself is well illustrated with over 200 photographs (in black and white) of vessels as well as ship plans by A D Baker III and detail drawings from Alan Raven. The book not only covers the Royal Navy but also Commonwealth vessels from Australian and Canada, among others.

The book contains the following chapters:

Friedman’s writing style is clear and easy to read and the man knows his subject. A lot of research has gone into this book and it shows from start to finish. This book is a must-have for anyone interested in the development of the Royal Navy through the second half of the 20th century.

I’m ready to start buying some more model vessels to paint after reading through this book.