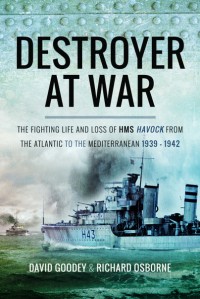 HMS Havock was one of the H-class (or Hero-class) destroyers that saw extensive action through the Second World War. The H- lass were similar to the G-class but used more welding to save weight. The H-class were approved in mid-1934 and were armed with the heavier CP XVIII 4.7-inch gun mounting which were also installed in the Tribal-class.

While the destroyers were generally as good as any others around at the time, their two main failings were their design for the North Sea and Mediterranean operations (reduced endurance) and poor anti-aircraft protection.

I was looking for a couple of things to read on my recent trip back to Australia to spend some time with mother and this was one of the books I took with me. The book struck my interest as it was written in part by the son of of one the members of the Havock‘s crew and also involved interviews with around 50 surviving members of the crew. In many respects it is David Goodey’s tribute to his father, Stoker Alber W. Goodey.

HMS Havock was one the the Royal Navy’s most famous destroyers from the first half of the Second World War with her exploits reported regularly in the English press.

Havock saw action in the Spanish Civil War and the report of the air attack by a single “four-engined Junker Type monoplane” that proceeded to attack with four bombs from about 6,000-feet while travelling at about 90 mph is an interesting entrance the rest of the book. I did like the description of the bombing run as Havock was in company with HMS Gipsy and the report notes,

Fire was opened with 0.5 machine guns. The aeroplane altered course to counteract Gipsy‘s manoeuvre and about 1646 1/2 four bombs were seen to leave the machine.

Gipsy promptly altered course further to Starboard and Havock to Port and the bombs fell between the two ships about 100 yards from  Gipsy and 300 from Havock.

The authors then go on to provide recollections from various crew members, in this case John Thomson, the Havock‘s Signals Telegraphist, Nobby Hall, also from Signals, and Able Seaman Griff Gleed-Owen. The book follows this pattern throughout, recounting the action, talking to the men who were there, then describing where Havock went next.

Havock did see a lot of action being present at:

Apart from the story of Havock and her crew, the book also has a fine collection of pictures included, many from the collections of the authors.

The book is an exciting read where the prose flows and even the casual reader will find an engrossing story without resort to great quantities of technical information. Destroyer at War provides some evidence of the contribution of the hard-working H-class destroyers through the Second World War. I happily recommend this to both naval historians and general readers. It is a compelling tale and one I have enjoyed immensely reading.