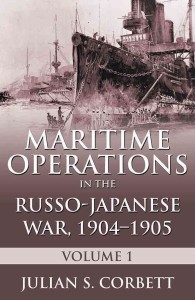 One of my favourite periods of Military History is the Russo-Japanese War of 1904-05 (RJW). I will also admit to an interest in the Sino-Japanese War of 1894-95  as well as  these were the last real naval battles of the pre-Dreadnought period (OK, so there was the First Balkan War of 1912-13 as well and the poor performance of the Turkish fleet there but I would still set the RJW as the watershed of the pre-Dreadnought naval battles).

Julian Corbett (Later Sir Julian Corbett) wrote the Maritime Operations of the Russo-Japanese War as a confidential publication for the Intelligence Division of the Admiralty War Staff. It was never made available to the general reader until well after Corbett’s death. Corbett composes a picture of the war by writing a continuous narrative that weaves the interrelationship of land and sea events as they affect each other. He examines the political objectives, the geography of the area as well as the naval aspects to tell that story. Because Corbett writes in a continues narratives he is easy to read as well.

Naval Institute Press published a hardback version of Corbett’s work back in 1994. This is the first release of the history in paperback. It is also released in an eBook version (Kindle).

The publishers do note however that:

it was impossible to reproduce the illustrations that accompanied the 1914/15 edition of this work owing to their size and condition. References to maps, charts, and plates have been left in the text in order to maintain the scholarly integrity of the work. The only known originals of these illustrations can be found in the Library of the Royal Naval College and at the Naval Historical Branch, Ministry of Defense, London.

This is really the only criticism that I could make against this work but perhaps a quick side trip if visiting England could be fruitful.

After the preface, the book commences with the opening page from the 1914 report and notes that the publication is confidential. It then goes on to say:

This book I the property of H. M. Government
It is intended for the use of Officers generally, and may in certain cases be communicated to persons in H. M. Service below the rank of commissioned officer who may require to be acquainted with its contents in the course of their duties, The Officers exercising this power will be held responsible  that such information is imparted with due caution and reserve.

The attention of Officers is called to the fact that much of the information  which this history is based has been obtained through the courtesy of the Japanese Government in giving facilities to our Attaches, and in placing at the disposal of the Admiralty their confidential  History of the War. This was done under the understanding that the information should be kept strictly confidential, and it is therefore most desirable that the lessons learnt from this History should not be divulged to anyone not on the active list.

Japan was an ally of Britain at this time.

There are 25 chapters to the book as well as 12 Appendices. The appendices also include the fleet lists for both navies at the time of the confrontation.

I would recommend as well, as a companion set to Maritime Operations in the Russo-Japanese War, 1904-1905, Vols 1 and 2, looking for a copy of The Russo-Japanese War at Sea 1904-5: Volume 1-Port Arthur, the Battles of the Yellow Sea and Sea of Japan and Volume 2: The Battle of Tsushima and the Aftermath by Vladimir Semenoff for a view of the war from the Russian side.

As I mentioned, highly recommended. I am now looking forward to getting  copy of Volume 2.