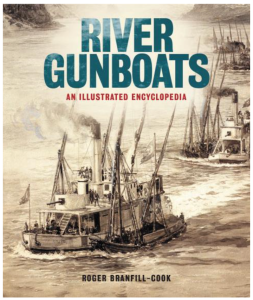 I had my reading schedule well planned out then River Gunboats –
An Illustrated Encyclopedia by Roger Branfill-Cook turned up in the mail and for the last couple of weeks it has taken over from my reading pile. What a great book.

Branfill-Cook has surveyed the river gunboat from their first appearance in 1824 with the Honourable East India Company’s gunboat Diana, in action on the Irrawaddy River in Burma through the river gunboats used in the First and Second World Wars to The US Brown Water Navy in Vietnam and into today’s gunboats.

What was amazing to me was the number of nations that ran river gunboats and Branfill-Cook notes vessels from places such as the Republic of Acre (I had to look this one up but let me give you a hint – think South America 1899); Austria-Hungary; Cameroon; USA and CSA; Estonia; Manchukuo; Sudan (and the Mahdi); Uzbekistan; and Yugoslavia to name a few of the 56 states listed as having gunboats.

Around 40 military campaigns in the 150 years from 1824 involved gunboats – some campaigns were large, some small and some are best described as bizarre. The book does not only look at the historic vessels but updates on modern riverine craft of today.

Apart from a useful bibliography, there are two appendices – one briefly dealing with River Gunboat Camouflage Schemes and the other looking at River and Gunboats in Popular Culture – and many of the older movies mentioned there can be found today on YouTube.

Each chapter looks at the vessels used by that country and includes photographs of the vessels where possible as well as details such as the date launched, armament, speed, and fate.

As an example of the content and as I mentioned Acre above, the entry for Acre covers the period July 1899 to November 1903 and the three declared republics. The gunboats involved were the Bolivian armed launch Rio Afua later captured by the insurgents and renamed Independencia. After the diplomatic peace settlement of 1903 the Independencia became part of the Brazilian Navy.

This is a book that would grace both the coffee table and the reference shelf and it is one I will refer to many times in the years coming. Recommended.