As I have been suffering a painting block, I thought I would do some mundane things like sorting and tidying over the weekend to see if that helped me over the block. The Prussian project I started nine years ago seemed like a good place to start. I had brought the figures from Australia to Manila packed rather well as it turned out – they survived the trip in Hold Baggage well. The figures painted and based are below. 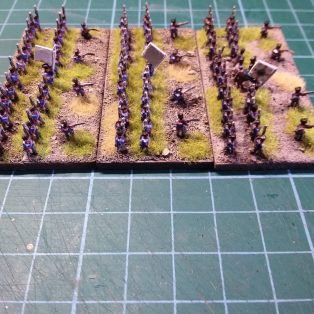 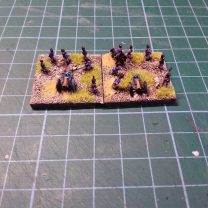 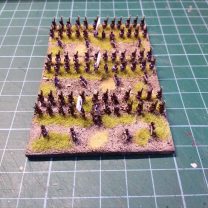 Those still requiring the bases to be finished are included the following image.

So far looking at the painted figures, while the infantry uniforms are a Prussian Blue, it appears almost black here. I am thinking I will need to lighten them up a little.

I am happy with the artillery and cavalry colours however.

Once I started unpacking the unpainted figures, I quickly got a sense of the size of this project as in total, when completed, the force will consist of:

I’m building the army with Heroics and Ros figures. H&R do a Prussian musketeer which I am using for the musketeers and fusiliers, the stovepipe British for the reserve infantry and then the Landwehr figures for the Landwehr. That seems to provide enough variety between the figures.

The Landwehr will be in dark blue coats, the same as the regulars, but some will be in white trousers, some in grey. Perhaps even in a couple of battalions I’ll mix the trousers in the battalion. I haven’t thought that far in yet.

The reserve infantry (British in stovepipe shako) look the part, especially compared to some of the images from the time. The only minor quibble I have with the detail is that the Brits have a backpack and the almost ubiquitous Prussian blanket roll is missing. To be fair to myself however, I have seen a picture of a Prussian reserve infantry figure like that – with pack and sans blanket. Colour of the Reserve Infantry will be a mix of grey and blue uniforms, and maybe even the odd red battalion – again, I am still researching that.