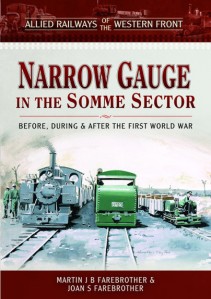 Something a little different for me although I guess like many wargamers, I do have at a minimum a passing interest in model railroading. My father was a fan of model railways and had an extensive layout in HO under the house in his retirement, with an Australian outline layout, particularly the New South Wales Government Railways. As a small child I had asked for a train set which I played with for about six weeks and which left my father hooked on model railroading for life. I diverged and became a wargamer but had spent many a pleasant hour with Dad talking railways, photographing them, building model kits for him and generally being one of his sounding boards when he needed some advice about some sticky issue with wiring or weathering or painting figures for his layout.

As a wargamer I have enjoyed various model railroad conventions and will from time to time pick up model railroad magazines, if only for modelling tips for terrain to use in a wargame.

The book covers the metre gauge networks built prior to the war, then the build up of the light (60cm gauge) railways around the French sector and then later the British and Dominion sectors. The book has a number of contemporary illustrations of both rolling stock as well as terminals and goods sidings. There are also illustrations of preserved narrow gauge locomotives from the period that are still existing in museums.

The book is well researched and follows a detailed process chapter by chapter where the flow of the text is secondary to the information passed along. In parts it is a difficult read however a fresh cup of a good java eases that problem.

To book has many maps of the railway lines and the connections between the 60cm narrow gauge and metre gauge lines. Also illustrated are the track plans to various stations. The track plans of the smaller stations and depots, many of which would provide an excellent track plan for the shunting puzzle are also mapped.

This book is a very good summary of the railways of the time with a great deal of information contained. It has been well researched and from my perspective it has dominated my reading over the last few days, covering a topic that I knew nothing about but that I have now been researching further. I can recommend this book to those interested in the history of railways as well as readers into military history, particularly of the 20th century. It will also interest narrow gauge model railroaders and railway modellers who have more esoteric tastes than the regular modellers. It will also find some interest among the wargaming community, especially those taking more of an interest in the First World War.

This is a book I found particularly interesting and I am happy to recommend it. Best, it is on sale at Pen and Sword currently with a good discount (April 2019).