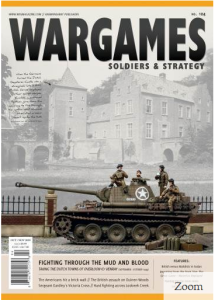 My favourite wargames magazine is Wargames, Soldiers & Strategy. For those more Facebook savvy it can be found in Facebook at @WSSMagazine. It is a magazine that I will unreservedly recommend to anyone at all interested or involved in the hobby of wargaming. Every couple of months a new issue arrives and becomes my main reading for a few days. Apart from wargame based articles from different periods of history, there are also regular columnists providing opinion pieces or generic discussions on modern wargaming. I should note now too that I am a figure gamer first but somewhat period agnostic, although I have a love of the ancient world1.

Rick Priestly, a very well know wargaming personality, for example, writes from time to time as does Richard Clarke from Two Fat Lardies. This month Richard Clarke took to task Rick Priestly’s comments in a previous issue on equality between armies in battle and therefore in wargaming. After all, if there is only 300 of you against tens of thousands of enemies you would just walk away, right? Well except for that well known case. Clarke’s discussion was written in a gentlemanly manner and is the sort of debate that fosters the expansion and improvement of the hobby.

However, I was disturbed in this last issue (Issue 104) with both an advertisement and an opinion piece for essentially unrelated but related reasons, if that makes sense.

The advertisement on page 21 is of the gory, painted Wild West Exodus figure of Legendary Vor Khet. The figure is of a large, ugly monster who is devouring pieces of what was clearly, recently a human figure. Perhaps I am a little old fashioned, or perhaps just old, and think that this is a level of excess that is a bridge too far to be acceptable. One thing it did do was resonated with comments in a later opinion piece in the same issue.

The opinion piece was by Chris King, whose column “The Irregular” carried a piece titled “Inclusion”. In this piece he talks about the future growth of the hobby relying on the hobby welcoming “people to the hobby, regardless of their race, their nationality, their gender, their beliefs, their abilities or any other label or lifestyle choices.”

Certainly there have been a number of what could academically be described as “misogynistic incidents” over recent years but could be better described by the less academic term of “bloody stupid behaviour by people who obviously believe the size of the object hanging between their thighs is an indication of intelligence, skill, ability and privilege”. There were a number of tweets floating around late last year if I recall correctly (or perhaps early this year) where at least one female wargamer in the UK was receiving support from a section of the wargames community as a result of issues with others.

In Australia in video games rather than more “traditional” wargames, Stephanie “Hex” Bendixsen, a presenter for many years on the Good Game, was the target of cyber bullying and doxing (doxxing?) comments, even though her gaming skill (and the fact that she could put together a coherent sentence) rated her way in excess of most of her detractors.

Wargaming is not a large hobby relative to other pasttimes but it seems to be a bitchy one, and for no good reason. Criticism, and not constructive criticism, is levelled at wargmers based on ridiculous items such as figure scale (6mm and 2mm gamers have heard them all); rule sets (the pro-DBx anti-DBx arguments come to mind along with the DBA 2.2 vs DBA 3.0 debates); historical vs fantasy; technical questions such as “how good was the Bismarck ” in naval circles; and so on.

Forums, arguably so 20th Century in these days of Facebook and Twitter, have become more acrimonious places generally (there are some exceptions). One whose acronym means more to me now as I have worked in IT for 45 years as a “temporary file”, is a prime example and one I gave up on 10 years ago.

It is a hobby, a pastime, to coin the dictionary definition, “an activity that someone does regularly for enjoyment rather than work; a hobby”. My work day is full of stress and pressure so what can be better than sitting down in the evening, loved ones around, a good coffee or single malt in hand, and read or prepare for a future wargame project?

So, I agree with Chris King’s piece in WSS. Wargaming should be inclusive, not exclusive. We should be welcoming those who want to play with little toy soldiers or boardgames with open arms, making them feel welcome and help the hobby to expand. Wargaming is a worldwide pastime now. I am writing this from Manila, Philippines (there is a Manila in Australia too – just to be clear) and there is a healthy wargame club, the Makati Marauders, about a 1km walk from where I am living currently plus a large boardgames group. I know of a healthy number of players in South Korea, Hong Kong, Singapore, Thailand, Malaysia and India. I know gamers in Brazil and Japan. So a hobby that was originally “Britocentric2“, then became “Eurocentric3” is now truly international with games played on all continents. There must be room for everyone in the hobby, especially for those of us a little old fashioned who like to handle the games pieces rather than just shuffle images around on a screen.

Play nice in the sandpit kids!

1. I just put some random photos of wargame figures through this piece to remind folks what my pastime is
2. OK, I wasn’t sure of a term to describe something that started in England (and Germany too I guess) then spread through many parts of the Commonwealth so being a good English speaker, I just made a word up
3. OK, so I think I just made up another one 🙂

7 thoughts on “Inclusiveness in Wargaming and Tastelessness”