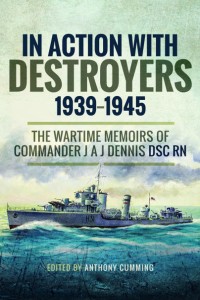 This book contains the wartime memoirs of Alec Dennis, who served on four destroyers during the Second World War, two of them as the commanding officers.

The destroyers were the workhorses of most navies during the Second World War and Commander Dennis saw action in the North Atlantic, the Mediterranean and the Indian Oceans. The two vessels he commanded were HMS Valorous (the fifth HMS Valorous, ex-HMS Montrose, a V-class flotilla leader of the British Royal Navy that saw service in World War I, the Russian Civil War, and World War II) and HMS Tetcott (a Type II British Hunt-class destroyer built for the Royal Navy during World War II. She was the only Royal Navy ship to be named after the Tetcott fox hunt).

Commander Dennis was mentioned in Despatches three times (Norway, sinking the Scharnhorst and in the North Sea) and awarded the Distinguished Service Cross (Greece 1942).

The book was unfortunately released after Dennis’s death. It is split into the following sections, following Acknowledgements, a Foreword, Maps and Editor’s Introduction:

This is followed by the Editor’s Historical Notes, End Notes, Bibliography and an Index. There are around 20 illustrations in the centre of the book as well.

It has been a fairly stressful few weeks for me here but a few pages of this book in the evening transports me to those momentous days of the Second World War and a feeling of what life was like on the workhorses of the fleet – the destroyers. A brilliant read!