Passed or past? For the grammar Nazis reading, I will plead a moments confusion. I do use “passed” as the past tense of “pass” but as time passes, has it passed or is it in the past?

I will admit, it is not quite 33% at the moment, but it will be at the end if next week so near enough. Back on 9 February I noted that One Twelfth of 2020 has Passed. Back in January there were three COVID-19 cases only in the Philippines  and life didn’t look like it was going to be too inconvenient.

Today we have been in enhanced community quarantine (ECQ) for 38 days with technically another nine days only to go. However there is talk now of adding at least another 15 days to the period, to ensure that the curve that is being flattened here is well flattened, doubly as important in the Philippines as there are many less hospital beds per million of population that in developed countries.

Should the ECQ be extended to 15 May then it will have been a full two months in Metro Manila. Some Barangays and Cities here have been put under full lock-down for periods ranging from 48 hours to seven days, generally because residents are not following the rules of the ECQ. In fact, a few days ago the Police had warned 130,000 ECQ violators and arrested 30,366. So many folks re not following the rules which maybe why the extension.

On that previous posts, I noted that since being in the Philippines I can tick off from my list: 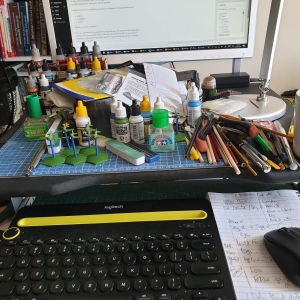 Work-wise, it has been both good and bad working from home. The bad is basically being locked up and not able to get out and just take a walk and the like. The first month was super hectic as well getting work from home organised for staff. The second month has been hectic as well but more for completing tasks. Currently I do not have a good area to work in but rather share my painting table (which is actually a mobile computer table). That keyboard is not my laptop but just a Bluetooth keyboard connected to my laptop which sits under the table. When I want to paint, keyboard and mouse are moved. Later this year I will, I hope, have an actual room I can use which will be much better.

Back in January I planned on getting the book reviews completed for the three books I have read and post those reviews here. I have achieved that for three (Battle of Manila, Miguel Miranda – Review, Armies of Celtic Europe — 700 BC – AD 106 by Gabriele Esposito — Review and In Action with Destroyers 1939–1945 — The Wartime Memoirs of Commander J A J Dennis DSC RN — Review).

I planned to finish that damned 1/35 scale tank and paint it and then get back into some figure painting. Well, I finished the build but have not started the painting yet. The Anglo-Saxons I was working on are basically unchanged as I have not put a lick pf paint on them, although I have looked to add then to another project.

I kept reading the historical fiction and as expected, that has led me down the path of yet another project (Damned Historical Fiction – Sub-Roman British and Arthur!) And, since I have been locked down here in Makati, I have not spent any time with my local family. By the time I get to see them it will have been three months or longer.

So, overall, it has not been the greatest year in my 65 completed so far but we live in hope for the 66th year!