Last weekend I had the time to indulge myself in my fantasy – the painting queue for 2017. I had originally thought it was not that extensive as I had not purchased all that much in the way of new lead in 2016 and besides, I did not have too much left over for painting from 2014 and 2015.

The painting queue follows in not particular order!

In addition to all that, there are a few other items on the list including:

23 April 2017 – Update: Nothing. Nada. Not done a thing! Maybe I need to motivate myself and buy some more figures.

Oh dear, lunchtime reading strikes again. Looking for some quick light reading over lunch I thought to myself that it was time for a little more research into the Guerra del Pacífico, that project I have had on the back burner for a while ((and which interestingly is driving me crazy as I cannot find the 10mm figures I had purchased for it)).

Up popped the Naval Battle of Abtao.

By the time of this battle, Chile and Peru were in alliance (which also included Ecuador and Bolivia) against Spain. Argentina and Brazil did not join the alliance, partly because they were busy fighting with Paraguay.

Spain had sent Admiral Mendez Núñez to South America and he decided to send two of his most powerful ships south to destroy the combined Chilean-Peruvian fleet. The Chilean-Peruvian squadron was under the command of Peruvian Captain Manuel Villar and had taken refuge at Abtao, a well protected inlet near the gulf of Chiloé in southern Chile.

The Spanish squadron appeared at the entrance of the inlet on 7 February 1866 but decided not to enter as they did not want to risk their ironclads running aground in the shallows. A cannonade lasting several hours was exchanged with little effect.

The Chilean-Peruvian squadron was at anchor and without steam (and it takes a long time to run steam up). Some of the vessels engines were also being overhauled so definitely the Spanish had the Allied fleet in a good position. Had the Spanish been a little less timid they may have won a good victory. However, in spite of the disadvantages, the Allied squadron mounted an energetic fight. The Covadonga, under the command of Lieutenant Manuel Thomson, managed to fire over an island and scored several hits on the frigate Blanca. The battle ended indecisively without further developments.

At this point the Spanish withdrew as the long range gun duel was not going to effectively damage anybody.

The Esmeralda was not at the anchorage on the day of the battle. The commodore had sailed to Ancud for coaling.

The Spanish squadron however managed to capture the Chilean steamboat Paquete del Maule (pictured above) which was transporting sailors to crew the new Peruvian ironclads Huáscar and Independencia.

With several kilograms of unpainted lead waiting in the man cave, I am still unable to decide what to do next. I looked further at the modern naval and even prepared an order for a Chinese and an Indian modern fleet along with the addition of a carrier or two for each and some aircraft models. I then duly faxed the order to Navwar only to have the fax machine fail to deliver (Navwar has the  most archaic ordering process and to be honest, the best way to order is to send them a letter ((actually, I am about to post that failed fax – I’ll report on the turnaround time in the future here in the Hole)).

Last night I received another batch of 2mm buildings from Brigade Models to use with the aeronefs and land ironclads. I am still trying to think about how to use them effectively. Mind you, I am fairly sure that I want to do something with them, so sure that I ordered some more 2mm terrain from Irregular Miniatures on Tuesday. Ian Kay of Irregular let me know that they were put in the post yesterday so I expect to see them here in Singapore by the middle of next week.

Whilst considering possible projects, I have been thinking about another 15mm DBMM army or two, especially as I really liked the look of the Khurasan Miniatures I have seen. I even considered some of the earlier American types from his ranges. It then occurred to me that as I was sitting in Asia, why not do an Asian army – say Cham; or Thai; or Vietnamese; or Indonesian; or Malay. Interestingly, I noted that Irregular Miniatures made Cham and as I had never tried painting any of his 15mm figures before, I thought I would give that a go. I therefore calculated a DBA Army for the Cham and ordered the figures off Irregular. They sell their figures individually which was nice – nothing left over from that for the spares box.

I even called up Paradigm Inifitum here the other day to see whether they had sold all the Plastic Soldier Company 15mm boxes that were not moving at the warehouse sale – let’s just say we are negotiating. Anthony has 20mm though so I am still really undecided about scale for World War 2.

Now, I reckon I have about a month or two of basing to finish the Union ACW army, so I guess the ideas are going to change about another dozen times before I finish the bases and can move on to the next project. Someone get me some sunglasses so I can no longer see the new bright shiny wargame figures

I hear you say.

After a stressful week or two where I have not painted (probably adding to my stress), I have, however, in the quieter moments been considering the next wargame project ((other than completing the basing on the ACW and John’s French WW1 fleet – yes John, they are about the painting table now)).

I was thinking about a DBMM army. I really liked the pictures of the Khurasan Miniatures I had seen but he’s taken the website off-air for a few weeks. I was thinking Kushan, or Khurasanian or even something South American. I also considered increasing my Koguryo Koreans to DBMM size. The Alain Touller Figurines are really quite nice. Lastly I have been considering something South-East Asian – Javanese and the like.

I was also thinking about my Peru-Bolivia-Chile project in 10mm. That seems quite an attractive proposition at the moment although I would need to write some rules.

What I finally decided on is Aeronefs. I have ‘nefs and Aerostats to paint. I have 2mm terrain pieces to fly over. I have always wanted a train set and I know where I can get a 2mm train. As for terrain, some A4 size MDF sheets from Art Friend here are going to be just the business as a base to build terrain on.

Yep, decided. A continuation of the Peshawar project.

I started to put the models together, sort them by navy and prepare them for painting. It was a good opportunity to take care of some before photos. I was rushing to prepare for painting as well due in part to my wanting to undercoat some buildings I had just finished assembling. They were a test as one of them was my first experience with etched brass which now no longer holds the same degree of fear for me. Back to the ships.

The picture to the right is the Chilean fleet in 1/2400th scale from Tumbling Dice UK laid out in preparation for assembly. Most of the parts go together quiet well and only two or three episodes of finger sticking occurred, although with the residual super glue on my finger, the finger print lock is not going to recognise me in the morning

I did make some simplifications when preparing the models, in particular to the Almirante Cochrane and Blanco Encalda, by dropping the sails altogether and having them steam up in battle trim. ((OK, so there were some issues adding the last batch of sails)) The two fleets are now outlined below.

At the moment, I am in Singapore and my Conway’s is in Australia so I am separated from my normal reference material. I shall look up more details of the vessels when I get back to Australia.

I have had to cheat with some of the vessels as there are no specific models but at 1/2400th scale, this is not so noticeable. For example, for the Peruvian Manco Capac and Atahulpa I have had to use the USS monitor as that was the only single turret ACW monitor made by Tumbling Dice. The other monitor made was a twin turreted vessel. Similarly with the Chilean fleet, in particular Cavadonga which is a shade large and not with a brigantine sail set.

Undercoating of these will occur later this week (waiting for the glue to dry at the moment). More details about these vessels to follow too.

Here is a better shot of Huáscar and Independencia. I’ll start to look at assembling and painting these little guys soon. 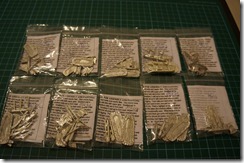 So, as I mentioned, the postman called today at the office ((actually, he called today at the condo as well – more steel paper from Magnetic Displays for my storage boxes)). I mentioned on July 23rd in the post the War of the Pacific 1879 to 1883 Naval Matters that I was ordering some 1/2400th scale vessels from Tumbling Dice UK. That was 10 days ago from London to Singapore. Damned good service from them.

I ordered the following vessels:

The USS Monitor is to provide a couple of single turret monitors for the Peruvians and the Los Andes and Javery were just to see what’s in them.

I like the way these guys look. Even included on some of the models are ratlines. I am so looking forward to assembling and painting these little guys. My big worry is that I may end up shelving my 1/1000th (ish) scale vessels and replacing them with 1/2400th as well.

The mailman knocked and a parcel arrived from the nice folks at Tumbling Dice in the UK. The Peruvian and Chilean Navies in 1/2400th scale for my little South American project. I’ll post more detail over the weekend as I get these little beauties home and have a chance to shuffle them around the coffee table making suitable nautical sounds.

So I was researching some ships last night to make up the fleets of what now is becoming my South American Project. I looked at some of the 1/1200th and 1/1000th available, Houston’s Ships again amongst others. However, I thought I’d go small as there is not so much space available here. I settled on getting some 1/2400th scale ships off Tumbling Dice UK. Twenty minutes on-line research at that wonderful mine of misinformation, Wikipedia, and I had enough information on the two fleets to spend another 20 minutes at the Tumbling Dice website. An order for the following has gone off: