Like a foam flake tossed and thrown,
She could barely hold her own,
While the other ships all helplessly were drifting to the lee.
Through the smother and the rout
The `Calliope‘ steamed out —
And they cheered her from the Trenton that was foundering in the sea.

The harbour at Apia on Samoa over the 15th and 16th of March, 1889 was the site of one of the most amazing naval confrontations in the 19th Century. Both the US and Germany were trying to expand their spheres of influence in the Pacific as well as obtain coaling stations in advantageous areas. One such location was the island of Samoa and the harbour at Apia. The Germans had been trying to take over the island, with the permission of the British, it seems, and there are grounds here for some nice little colonial skirmish Wargames.

The ships involved in this event are all described in Conway’s All The World’s Fighting Ships: 1860-1905, probably one of my favourite books. The page references below refer to this edition of Conway’s.

In Apia Harbour on that fateful day were, amongst other vessels, 7 ships of war. The Americans were represented by USS Trention (pg 126), USS Nipsic ((a Kansas Class Gunboat)) (pg 130) and USS Vandalia ((a Galena and Vandalis class sloop)) (pg 127).

The British were there too with HMS Calliope ((a Calypso class steel corvette)) (pg 54) flying the Union Jack.

The reason the US and German vessels were there was due to the political unrest in Samoa at the time. The US appear to have perceived the German presence at Samoa as contrary to US interests in the Pacific. The British were also there but more in a position of just watching what was going on.

The US commander was Rear Admiral Lewis A Kimberly aboard the Vandalis and he appears to have ignored the threatening weather. Local advice from Samoa was that the hurricane/typhoon/cyclone season ((actually, as it is the South Pacific Ocean I think that it was technically a cyclone)) was past there was no danger. I think that the fact that the Germans were still there an not moving may have persuaded the Admiral to remain in place as well.

The Germans were also remaining in the harbour, presumably because the Americans were.

The cyclone then arrived. 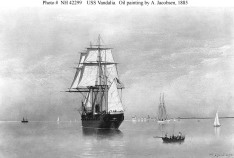 In the meantime, the Americans and the Germans were trying to fire their engines up and secure their anchors to ride out the storm but these were not strong enough to resist the cyclone.

The Eber was blown onto the reef in the harbour and wrecked with the loss of most of the crew. The Adler and the Vandalia suffered heavy crew casualties and were wrecked beyong the possibility of recovery.

Meanwhile the Trenton‘s steam powerplant was extinguished by water entering the hause pipes. She dragged her anchors and was wrecked after running aground with light casualties. The Olga and the Nipsic were run ashore and later hauled off and repaired. 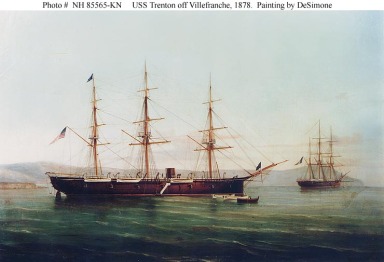 The hurricane also marked the passing of the old US Navy. The wooden cruisers and muzzle-loading guns along with full sailing rig and limited steam power were replaced over the coming years. They were replaced by the US New Navy of steel ships, powerful engines and modern guns. These all started entering service later that year.

The cyclone also service to enhance Britain’s naval reputation, especially as the Calliope was not a new ship but, according to Conways was:

designed by Nathaniel Barnaby, they were probably the most successful design of cruising ship built for the navy

More information on the vessels and lots of period photographs can be found at the US Naval Historical Center:

It was from the history of the Vandalia that the following was noted: 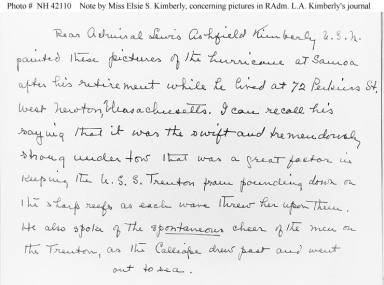 Lastly, the final word here goes to an Australian poet, A.B. “Banjo” Patterson in his poem:

The Ballad of the ‘Calliope’

By the far Samoan shore,
Where the league-long rollers pour
All the wash of the Pacific on the coral-guarded bay,
Riding lightly at their ease,
In the calm of tropic seas,
The three great nations’ warships at their anchors proudly lay.

Riding lightly, head to wind,
With the coral reefs behind,
Three Germans and three Yankee ships were mirrored in the blue;
And on one ship unfurled
Was the flag that rules the world —
For on the old `Calliope’ the flag of England flew.

When the gentle off-shore breeze,
That had scarcely stirred the trees,
Dropped down to utter stillness, and the glass began to fall,
Away across the main
Lowered the coming hurricane,
And far away to seaward hung the cloud wrack like a pall.

If the word had passed around,
`Let us move to safer ground;
Let us steam away to seaward’ — then this tale were not to tell!
But each Captain seemed to say
`If the others stay, I stay!’
And they lingered at their moorings till the shades of evening fell.

Then the cloud wrack neared them fast,
And there came a sudden blast,
And the hurricane came leaping down a thousand miles of main!
Like a lion on its prey,
Leapt the storm fiend on the bay,
And the vessels shook and shivered as their cables felt the strain.

As the surging seas came by,
That were running mountains high,
The vessels started dragging, drifting slowly to the lee;
And the darkness of the night
Hid the coral reefs from sight,
And the Captains dared not risk the chance to grope their way to sea.

In the dark they dared not shift!
They were forced to wait and drift;
All hands stood by uncertain would the anchors hold or no.
But the men on deck could see
If a chance of hope might be —
There was little chance of safety for the men who were below.

Through that long, long night of dread,
While the storm raged overhead,
They were waiting by their engines, with the furnace fires aroar.
So they waited, staunch and true,
Though they knew, and well they knew,
They must drown like rats imprisoned if the vessel touched the shore.

When the grey dawn broke at last,
And the long, long night was past,
While the hurricane redoubled, lest its prey should steal away,
On the rocks, all smashed and strewn,
Were the German vessels thrown,
While the Yankees, swamped and helpless, drifted shorewards down the bay.

Then at last spoke Captain Kane,
`All our anchors are in vain,
And the Germans and the Yankees they have drifted to the lee!
Cut the cables at the bow!
We must trust the engines now!
Give her steam, and let her have it, lads, we’ll fight her out to sea!’

And the answer came with cheers
From the stalwart engineers,
From the grim and grimy firemen at the furnaces below;
And above the sullen roar
Of the breakers on the shore
Came the throbbing of the engines as they laboured to and fro.

If the strain should find a flaw,
Should a bolt or rivet draw,
Then — God help them! for the vessel were a plaything in the tide!
With a face of honest cheer,
Quoth an English engineer,
`I will answer for the engines that were built on old Thames side!

`For the stays and stanchions taut,
For the rivets truly wrought,
For the valves that fit their faces as a glove should fit the hand.
Give her every ounce of power,
If we make a knot an hour
Then it’s way enough to steer her and we’ll drive her from the land.’

Like a foam flake tossed and thrown,
She could barely hold her own,
While the other ships all helplessly were drifting to the lee.
Through the smother and the rout
The `Calliope’ steamed out —
And they cheered her from the Trenton that was foundering in the sea.

Aye! drifting shoreward there,
All helpless as they were,
Their vessel hurled upon the reefs as weed ashore is hurled.
Without a thought of fear
The Yankees raised a cheer —
A cheer that English-speaking folk should echo round the world.

All images in this article are taken from the Online Library of Selected Images and the Naval Historical Center, an official US Navy website and the location of thousands of wonderful photographs.

6 thoughts on “Apia, Samoa, March 1889 – The US and Germany Square Up To Each Other In The Pacific”