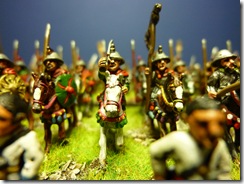 I had decided to play the De Bellis Magistrorum Militum (DBMM) competition at Cancon 2011. Looking through the army lists as well as the figures I had at home I had settled on something Carolingian in appearance. I had some figures that I had acquired at a bring and buy in the UK and had never used them. This was the chance. A couple of games with Doug as a test of some army compositions (as well as an introduction to the rules) occurred and I finally settled on Eastern Franks circa 933 C.E.

This period was shortly after the transition from the Carolingian Empire to the split between Eastern and Western Franks – the Eastern Franks eventually taking the title of the Holy Roman Empire. As a result, I felt using the essentially Carolingian figures worked with this army.

The army was built into three commands, as follows:

The rules themselves work on command/army morale being based on steps that diminish the effectiveness of the army as casualties increase. In addition, the general can take some “stratagems” to use during the battle. The remaining parts of the army list, including the total ME (the morale effectiveness) is shown below:

The stratagems taken were Scouting and Feigned Flight.

The army itself, when laid out, looked like is shown below. The next instalment will cover the first of the games.