Nineteen years ago I purchased the Navwar Battle of Tsushima pack. Back then if I recall correctly it cost about  £39.95*. Now, pack 3CBP04 costs £55.00. The pack itself contains all the major vessels from the Battle of Tsushima, Japanese and Russian sides, in 1/3000 scale. I added some extra vessels around the time as well to be able to reproduce most of the vessels involved in that conflict.

At the time I put this set together I did not have much in the way of painting information so painted the Russian fleets in basically the “Victorian Livery” of black hulls, white superstructures and ochre funnels. The Japanese vessels larger than a TBD were painted in a tropical white livery. Over time access to better research and information as well as some nice contemporary prints from Japan suggested that pretty much everything was in the wrong colour. Oh well, my excuse is that at the time I was a wargamer first and whilst an avid reader, my knowledge of nautical matters was limited – but I was learning.

So, I learnt that the Japanese vessels were in grey, and given that later in the 20th century each of the arsenals in Japan used a different shade of grey, I figured at least that the shade of grey was not that important for this project. I started to repaint them.

The Japanese TDBs and torpedo boats were in black. Everything was coal fired at this stage.

On the Russian side, as I mentioned above, everything had been painted in the Victorian Livery. Repaint started there as well. The Baltic Fleet, “the Fleet that had to Die,” had very little needing to be done as they were in a Victoria Livery it seems. The Vladivostok and Port Arthur vessels were another matter however. The Vladivostok fleet was reported in some reading I did to be in a dark green colour, presumably to make it harder to discern the vessels against a green landscape. I had the impression that it was a Brunswick green but I may be misremembered the reading of 15 years ago and mixing them up with the pre-World War 1 Austrians. However, I opted for a slightly lighter shade.

The Port Arthur fleet was reported in some reading I did as having been repainted in a cinnamon colour. This is a darker brown and I guess it was to make the vessels harder to discern against the dusty hills behind Port Arthur. The brown shade may also have come from a shortage of paint in the correct shade so that when the paints available in Port Arthur were all mixed together to be able to maintain he vessels tied up there, a brown shade may have resulted. I opted for a lighter shade which I am not happy with and may repaint again when motivation strikes.

Lastly, at this stage of my naval wargaming career, I was taking a quick and easy route to basing. I picked up some Hammered Metal, Coral Blue from the hardware store. The Hammered metal ranges of paint are designed to look like old style metal filing cabinets. When painted on a flat surface they provided a sea effect. On the vessels I have repainted, I added a wake from the vessels to it is easy to see what has been redone and what is still in the original colours I painted in. That Hammered Metal when painted on a flat surface such as a 6’x4′ pieve of particle board. provides a very suitable sea surface.

The only other work I did on these vessels was to add a brass wire mast or masts where appropriate. Photos below.

A closeup of Rurik – see the light green

Kobe Maru, painted as one of two hospital ships, stored with these huys just because.

THe rest of the Japanese TDBs abd Torpedo Boats 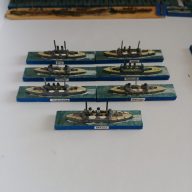 The main Japanese battleline. The famous Mikasa to the front

Miscellaneous Japanese vessels. The one at the front has been repainted, hence the wake missing from the others. The others show the mix of colour schemes used

The fleet transport from Australia 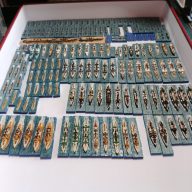 The full set plus a couple of ring-ins

The fleet that had to die – the Baltic Fleet capital ships 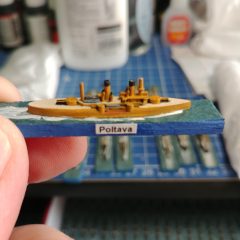 A closeup of Poltava showing the baby poo” brown I used. THis needs to be darkened I think 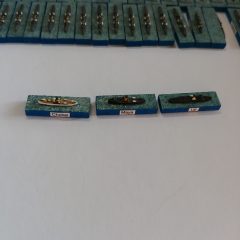 THree of the smaller Japanese vessels 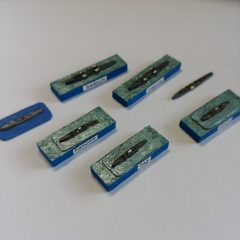 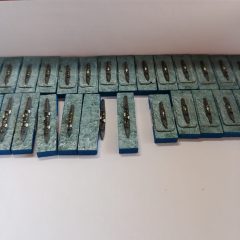 Half the Japanese TDBs and Torpedo Boats

*Note re pricing. How hazy the grey matter gets over time. It was £39.95 at the time, not the £25.00 I later remembered – although I am now thinking that the Matapan set may have been around 25 quid. I looked back to the original post about the RJW ships from Navwar from about 10 years or so ago and had the price recorded there. In any case, it is a good purchase!