Back in May 2019 in Moving Right Along – Wargaming Tasks – 2019 update!, back before the plague, I noted that I had received

Heroics and Ros 6mm Greeks for yet another Ancient project. I am still waiting on the delivery from Rapier Miniatures, but I fear these are the first order to the Philippines to go astray as it has been over 6 months now Update (May 1st) – I just received an email from Stefan at Rapier (not bad, about one hour after posting this) to note that the parcel was sent but they will send again. Brilliant service guys – thank you.

The Rapier Greeks duly arrived and the original parcel was received back at Rapier in the UK a few days after a replacement order was sent to me. Ah the vagaries of PhilPost. I digress however.

Last year I had also read a fair bit of Greek history, both land battles and naval, and had decided, with all those 6mm Greeks, along with a couple of fleet packs of Navwar’s 1/1200 ancient ships and a copy of GMT’s Galley, to refight the Peloponnesian War, both on land and sea, as a project.

Reading Battles and Battlefields of Ancient Greece – A Guide to Their History, Topography and Archaeology – Book Review along with Great Battles of the Classical Greek World – Review and it occurred to me that I would have the figures available and the information to pretty much refight all the Greek vs Greek battles of the classical world in 6mm on a 2 foot square board (yes, wargamer’s megalomania at its best).

Enter the plague! Several months of listless inactivity followed by a home move out of Metro Manila to a province and I had achieved absolutely nothing. In my defense, there was a good deal of work pressure at the same time as quarantine lockdowns and what-not (yes, I know, an excuse not a reason).

Tonight, sitting in the new residence (temporary for about 6 months while the final Thomo’s Hole is being constructed) and it occurred to me that to get rolling on this project, I could use my Commands and Colors (C&C) set. I have all six expansions from the Ancient C&C, although I had not placed the Spartan expansion figure stickers on the blocks for that yet. I started that tonight.

I now have a project, doable in short order — refighting the classical Greek world using C&C. I have the blocks, I have the reference material and best of all, I don’t need much space or to paint anything. When I get up to the Peloponnesian War I will probably consider breaking out War Galley as well. However, for the time being, it’s lock shields and advance!

While I was back in Australia visiting mother, I thought it would be a good idea to buy some more ships. Not modern warships, not World War II, World War I or Russian Japanese War. Not Napoleonic but rather ancient vessels. OK, I did buy some World War I ships, an American fleet pack, however everything else was ancient.

As you may remember, I reviewed a few books here on ancient naval battles, Rome Seizes the Trident – The Defeat of Carthaginian Seapower and the Forging of the Roman Empire – Review; A Naval History of the Peloponnesian War – Ships, Men and Money in the War at Sea, 431-404 BC – Marc G DeSantis – Review and Great Naval Battles of the Ancient Greek World by Owen Rees – Review in particular. I have always had a love for triremes, quinquiremes and the like so I decided that I should engage in some scenarios from those books.

I already had a Roman and a Carthaginian fleet pack pack in Australia so packed that and brought it back to Manila. Each pack has about 20 vessels in it. An order was sent off to Navwar for more galleys – there are never enough – and I purchased:

This should provide a nice basis for some galley on galley action. I like the Navwar galleys for their cost, and painted they look the business. I may add a couple of Langton galleys in the future as flagships and such. Biggest decision prior to painting will be to paint them with sails up (colourful) or sales down (historically more correct).

Right, well that’s another project to get going on with – only about 100 other projects to finish before these little beasties turn up from England.

When reading that I thought it would be a good idea to read Great Battles of the Classical Greek World by Owen Rees, ISBN: 9781473827295, published on 15 August 2016 at the same time as there was a degree of overlap between the two.

Both books are published by Pen & Sword and both look at one area of particular interest to me. I will review both books separately in other blog posts. 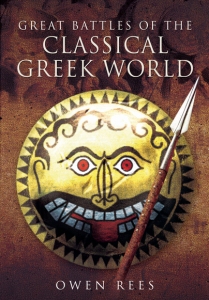 So, what is the risk to the Wargamer? Well, it is simple. My favourite periods of interest are Ancient Wargaming and Naval Wargaming. The Peloponnesian War has both. The 25 years of the Peloponnesian War covered a bitter period of classical Greek history and warfare. By this time the Greeks were well settled into the hoplite style of warfare with armoured man, large shields and a long spear standing in a long line with other men similarly armed.

Fortunately the core troops from the earlier period will also double up for the later period. Currently I am planning the hoplite forces. This little project will be in 6mm for reasons of:

Rules will either be DBA or Basic Impetus. The armies should be easy enough to build to be useful for both rule sets. For example, the early Athenian army in Basic Impetus consists of a maximum of 8 bases of Hoplites, and one base each of Slingers, Javelinmen, Thessalian Light Cavalry and Thessalian Medium Cavalry. The DBA equivalent is 10 elements of Hoplites and two elements of skirmishers.

The only real question I have to consider from the rule perspective is whether to use 60mm or 40mm wide bases. DBA would normally be a 40mm element frontage while Dadi and Piombo recommend a 60mm frontage for Basic Impetus in 6mm. 60mm frontage is also the base frontage for Baccus’ SPQR rules.

More updates later as I start to plan further.