Oh dear, lunchtime reading strikes again. Looking for some quick light reading over lunch I thought to myself that it was time for a little more research into the Guerra del Pacífico, that project I have had on the back burner for a while ((and which interestingly is driving me crazy as I cannot find the 10mm figures I had purchased for it)).

Up popped the Naval Battle of Abtao.

By the time of this battle, Chile and Peru were in alliance (which also included Ecuador and Bolivia) against Spain. Argentina and Brazil did not join the alliance, partly because they were busy fighting with Paraguay.

Spain had sent Admiral Mendez Núñez to South America and he decided to send two of his most powerful ships south to destroy the combined Chilean-Peruvian fleet. The Chilean-Peruvian squadron was under the command of Peruvian Captain Manuel Villar and had taken refuge at Abtao, a well protected inlet near the gulf of Chiloé in southern Chile.

The Spanish squadron appeared at the entrance of the inlet on 7 February 1866 but decided not to enter as they did not want to risk their ironclads running aground in the shallows. A cannonade lasting several hours was exchanged with little effect.

The Chilean-Peruvian squadron was at anchor and without steam (and it takes a long time to run steam up). Some of the vessels engines were also being overhauled so definitely the Spanish had the Allied fleet in a good position. Had the Spanish been a little less timid they may have won a good victory. However, in spite of the disadvantages, the Allied squadron mounted an energetic fight. The Covadonga, under the command of Lieutenant Manuel Thomson, managed to fire over an island and scored several hits on the frigate Blanca. The battle ended indecisively without further developments.

At this point the Spanish withdrew as the long range gun duel was not going to effectively damage anybody.

The Esmeralda was not at the anchorage on the day of the battle. The commodore had sailed to Ancud for coaling.

The Spanish squadron however managed to capture the Chilean steamboat Paquete del Maule (pictured above) which was transporting sailors to crew the new Peruvian ironclads Huáscar and Independencia.

I started to put the models together, sort them by navy and prepare them for painting. It was a good opportunity to take care of some before photos. I was rushing to prepare for painting as well due in part to my wanting to undercoat some buildings I had just finished assembling. They were a test as one of them was my first experience with etched brass which now no longer holds the same degree of fear for me. Back to the ships.

The picture to the right is the Chilean fleet in 1/2400th scale from Tumbling Dice UK laid out in preparation for assembly. Most of the parts go together quiet well and only two or three episodes of finger sticking occurred, although with the residual super glue on my finger, the finger print lock is not going to recognise me in the morning

I did make some simplifications when preparing the models, in particular to the Almirante Cochrane and Blanco Encalda, by dropping the sails altogether and having them steam up in battle trim. ((OK, so there were some issues adding the last batch of sails)) The two fleets are now outlined below.

At the moment, I am in Singapore and my Conway’s is in Australia so I am separated from my normal reference material. I shall look up more details of the vessels when I get back to Australia.

I have had to cheat with some of the vessels as there are no specific models but at 1/2400th scale, this is not so noticeable. For example, for the Peruvian Manco Capac and Atahulpa I have had to use the USS monitor as that was the only single turret ACW monitor made by Tumbling Dice. The other monitor made was a twin turreted vessel. Similarly with the Chilean fleet, in particular Cavadonga which is a shade large and not with a brigantine sail set.

Undercoating of these will occur later this week (waiting for the glue to dry at the moment). More details about these vessels to follow too.

Here is a better shot of Huáscar and Independencia. I’ll start to look at assembling and painting these little guys soon.

So, as I mentioned, the postman called today at the office ((actually, he called today at the condo as well – more steel paper from Magnetic Displays for my storage boxes)). I mentioned on July 23rd in the post the War of the Pacific 1879 to 1883 Naval Matters that I was ordering some 1/2400th scale vessels from Tumbling Dice UK. That was 10 days ago from London to Singapore. Damned good service from them.

I ordered the following vessels:

The USS Monitor is to provide a couple of single turret monitors for the Peruvians and the Los Andes and Javery were just to see what’s in them.

I like the way these guys look. Even included on some of the models are ratlines. I am so looking forward to assembling and painting these little guys. My big worry is that I may end up shelving my 1/1000th (ish) scale vessels and replacing them with 1/2400th as well. 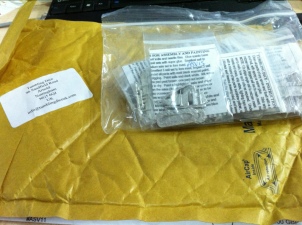 The mailman knocked and a parcel arrived from the nice folks at Tumbling Dice in the UK. The Peruvian and Chilean Navies in 1/2400th scale for my little South American project. I’ll post more detail over the weekend as I get these little beauties home and have a chance to shuffle them around the coffee table making suitable nautical sounds.

So I was researching some ships last night to make up the fleets of what now is becoming my South American Project. I looked at some of the 1/1200th and 1/1000th available, Houston’s Ships again amongst others. However, I thought I’d go small as there is not so much space available here. I settled on getting some 1/2400th scale ships off Tumbling Dice UK. Twenty minutes on-line research at that wonderful mine of misinformation, Wikipedia, and I had enough information on the two fleets to spend another 20 minutes at the Tumbling Dice website. An order for the following has gone off:

I’m a wargames tart. Really. There I was this morning, contemplating which part of the painting pile to attack when I got back to Singapore Friday night and something bright and shiny flashed part my eyes. For some reason the iPad had a Safari tab open at Pendraken Miniatures and for some other reason unknown to me, I had been looking in there a while back at 10mm 19th century figures. I suspect I was looking for an alternative to 6mm figures for the Wars of 1859, 1866 and 1871 in Europe. My eyes passed across a range of figures for the 1st Schleswig-Holstein War Danish, an area I have an interest in. I was starting to think about starting my 19th century Europe project with that conflict. Then it happened. I saw it … 1879-1884 South American Pacific War.

I was, of course, superfluously familiar with this conflict, after all, we all know about the Huáscar and the battle between the Esmeralda  and Huáscar don’t we? Well, that was about the sum total of my knowledge of that conflict. I put the iPad down and went to some meetings and then over lunch back here at the hotel I read some more. A little conflict and one of the many that seemed to plague South America since independence, it involved Chile, Peru and Bolivia essentially fighting for four years over bird poo. The British were involved as well, after all, there was the odd dollar to be made then with bird poo. At the end, Chile won and a few years later artificial bird poo was created negating the whole point of the conflict.

However, it seems that the memory of defeat runs deep and every year Bolivia has a festival of the sea celebration, in remembrance of when Bolivia had a sea-coast, know held by Chile.

It was bright, it was shiny, I was starting to get hooked. The war started with Chilean armed forces at about 2,700 effectives and Peru and Bolivia between them able to field around 10,000 troops. Size was good. I also have not figures for this war either and my initial thought was that they were probably all in Napoleonic style uniforms still. Wrong. The Chileans were in French style uniforms with Pickelhauben and the Bolivians and Peruvians in a mix of dress with kepi. Colours were bright. Someone get me my sunglasses.

The thought has been germinating in my head for the day so far. I did a quick look for some source books and discovered what seemed a good history on Amazon,  The Ten Cents War: Chile, Peru, and Bolivia in the War of the Pacific, 1879-1884 by Bruce Farcau (until I saw the Kindle version was a ridiculous $88.76). There were some other history books and uniform books around but all were expensive. I thought to myself, “self, why not do this as an online project?” So there is was – I had a nice little war and a way of researching it. What else was needed? Figures! Rules!

As I have not really got any 10mm figures and as the Pendraken Miniatures range has always tempted me, I thought I’d give it a go in 10mm. There was also, of course, the naval component to the war. Tumbling Dice Miniatures make some 1/2400th scale models of these vessels. Houston’s Ships (from Great Endeavours makes some 1/1000th(ish) scale vessels from this war as does North Head Miniatures on Shapeways so there is the naval side covered.

The next step is Rules – but more on those later.

So there is is, 10mm South American Wars of the late 19th century – another project on the go!