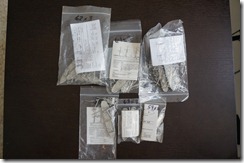 Back on March 18th I noted that I had picked up two fleets from Houston’s Ships for the Battle of Lissa. I wrote then of the Italian fleet. The ships are in an approximate 1/1000th scale (don’t look too closely at scale lengths etc) but are quite nice models when completed.

Anyway, at the time I noted that I would update Thomo’s Hole with the contents of the Austro-Hungarian pack. I intend to put that to rights now. 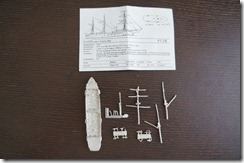 As with the Italians I opened a packet to have a closer look, in this case a centre battery ship, the Kaiser. As with previous packs there is a hull, masts, ventilators, ships boats and davits in the pack. The moulding is a bit rough and ready as on the other models but again, I have the feeling this will clean up and paint up quite well to be used in my Austro-Hungarian fleet. Colours will likely be the Brunswick Green these vessels may have been painted in, on the grounds that they will make a good looking opponent for the Italians.

The rigging instructions are quite basic as well and I suspect that I will need to refer to Conway’s for this as well as further information on the vessels themselves. I think I have also found a good supply of rigging cotton but more on that later.

Back on December 8th, 2008, I posted about a 1.1200th scale model that was available about HMVS Cerberus. I also mentioned in that about the battle to save the real Cerberus which is currently ruasting away ion Port Phillip Bay, Melbourne. There has been an update to the real ship and the following comes from the Friends of the Cerberus.

At the monthly meeting of the City of Bayside Council last night, Council decided to advise the federal and state governments that Bayside wishes to proceed with the bracing of the Cerberus gun turrets. Before the recommendation to Council was discussed, Peter Tully and I spoke for three minutes each. We stated our position that Friends of the Cerberus appreciated its close working relationship with Bayside and urged Council to accept the recommendation before it and Save the Cerberus. That all seven councillors spoke in favour of the motion was encouraging as were the comments made regarding the importance of saving Cerberus. Councilor Frederico summed up our view regarding the letter from the federal heritage department which she described as hilarious given their proposal that photos in an interpretive display somehow made up for allowing Cerberus to collapse. Councillor Hayes also took on board the irony of both the Commonwealth and St ate Heritage departments suggesting doing nothing and allowing Cerberus to collapse.

What was particularly pleasing was the gratitude expressed by councilors to Friends of the Cerberus for our work in campaigning to Save the Cerberus.

Councillors Frederico, Norris, Hayes and Mayor Cooper-Shaw all strongly expressed their gratitude. My suspicion is that the other three councillors, who also supported adopting the recommendation, were also grateful but it had all been said by the time that they spoke. The recommendation that the bracing proceed was passed unanimously. Council will now formally lodge an application for a permit to complete the bracing project.

For those who don’t remember, the City of Bayside is the legal owner of Cerberus as well as the project manager for the bracing project.

In summary, after the meeting both Peter and I were greatly encouraged and confident that Friends of the Cerberus in conjuncion with the City of Bayside and the National Trust will be able to convince the federal and state heritage bodies to reverse their opposition towards bracing Cerberus.

Friends of the Cerberus ask us to keep the letters going to Federal Minister for Heritage Tony Burke:

and the Victorian Minister for Planning, Matthew Guy: 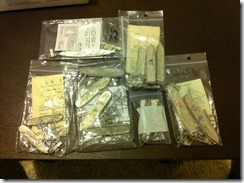 As if I did not have enough wargame plans for this year, friend Douglas’ foray into 1/1000th scale pre-dreadnought vessels has caused the usual wargamer’s “bright, shiney object” syndrome. Yep, purchased some more ships in yet another scale for yet another period.

In this case, Italians and Austrians of the Battle of Lissa fame. The manufacturer? Houston’s Ships. Houston’s Ships are not known for their extreme accuracy. In fact, some of the vessels, to scale, are longer than the original vessel, others are shorter. 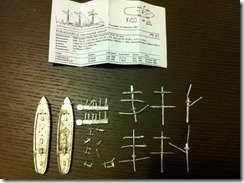 Opening one of the packs, in this case, the Formidable, we can see that there are two hulls and sufficient masts, whale boats and guns to complete two vessels of this case.

The instructions and rigging instructions are basic and I would recommend consulting something like Conways All the World’s Ships for additional information.

Whilst the castings are a bit rough around the edges, a little bit of filler and some clean-up and they should produce some nice models.

More on all this later. In the meantime, I am trying to decide whether to paint these vessels in an Italian Grey or make them vessels of an imagi-nation and paint them in a good Victorian Livery.

Some of these vessels were extras after doing my Russian Japanese War collection, others are samples that Jim from WTJ sent me. Of course, these came back in company with my painted Japanese and Russian vessels from that War.

Also back and ready for paint is the Italian and Austrian fleets from World War 1. These were a set I put together when I was in Mongolia. I have plans to expand that set to include the French fleet as well as the Turks and Greeks.

In the collection for a while and ready for me to start painting is the Grand Fleet and the High Seas fleets from Jutland. I’ve had these for a few years now and it is time they were painted. Elsewhere here in the Hole you’ll find the article from Mal Wright about warship colours of World War 1 ships. Also there is a link to the collection in the US of World War 1 (in particular) dazzle schemes for merchant vessels. I may need to get a few merchants for the odd World War 1 convoy.

We then move forward to World War 2 where I think, if I look hard enough, I’ll find some German U-Boats, destroyers and other surface vessels as well as some British – but this is still be be confirmed. Definitely in the collection is the return of my French and Italian vessels of World War 2 – two smallish fleets but certainly enough for playing some games with. These are complemented by the Battle of Matapan set – all the vessels from the Battle of Matapan. These, along with all the others that a manufacturer is not specifically identified for, are from Navwar in the UK.

To round out the vessels needing paint, there is the Allied (mostly American) and Japanese fleets from the Battle of the Philippine Sea. There are a bucket-load of vessels for this to paint.

To complement that as well as doing something a little different, I also built a collection of all the vessels from Task Force 57 – the British and Commonwealth Pacific Fleet. Also included in that collection is a large number of 1/3000th scale aircraft. Originally I was going to mount these on a flying style of base – some thing brass wire about 5 cm tall, a metal washer for the base and a tiny hole drilled into the plane. Perhaps even three models would be glued to a single upright. However, after a closer examination again today, maybe I will glue the aircraft to the flight decks of the aircraft carriers.

There is some latitude being taken with the aircraft. Navwar does not make a 1/3000th scale Seafire or Spitfire so a Corsair is going to have to represent them. In any case, Corsair’s were used by a number of squadrons in that fleet.

This then is the plan – along with working on and finishing the Victorian Science Fiction. I’ll blog later on their progress although I will say here that two Aeronef fleets are just about finished.

I received a parcel of goodies yesterday from Brigade Models of the UK. One of the items I had ordered was their model of the HMVS Cerberus. This model is in 1/1200th scale and represents the vessel lying in Port Phillip Bay in Victoria, currently acting as a breakwater. A truly lovely model this. Photos of the various parts can be seen by clicking on the album link below. I will post a picture of her when she is painted up finally. In the meantime, if you are interested in getting your own Cerberus, head off to Brigade Models and have a look. Details of the real Cerberus can be found at the HMVS Cerberus Home Page, dedicated to preserving the vessel. 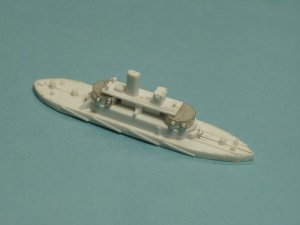 I realized that the Cerberus was parked in Port Phillip Bay in Victoria as a breakwater however I did not know that a model of her had been made. Brigade Models of the UK have released a model of the Cerberus (actually, they did it on 3 May 2008). The link to it is Australian Cerberus class Monitor – VLI-180.

There is also a very good web-site as part of the campaign to save the Cerberus at HMVS Cerberus – Home Page. The Cerberus was, a vessel of the Royal Victorian Navy and is historically very significant. The vessel is the last remaining Ironclad monitor of her time and one of the first to have been built. She was certainly the first fighting vessel produced by Great Britain that was powered entirely from her engines, not having any sails.

The picture of the model is taken from the Brigade Models web-site.